After leaving the Hagia Sophia, we walked across an open space towards the Sultanahmet mosque. Amazingly, this space has been open since the founding of the Roman city of Byzantium in 330 CE, when it was called the Augustaeum. Entrance to the mosque was temporarily barred to tourists because it was time for midday prayers. We decided to walk off to one side to see the remains of the ancient hippodrome. Standing just to the east of the now-buried grand palace of the emperors, and west of the Sultanahmet mosque, it is now simply an open space, as you can see from the featured photo.

This late-Ottoman style water fountain at the northern end of the hippodrome was intriguing. It turns out that it is called the German fountain for a good reason. It was financed by the German government to commemorate the visit of Kaiser Wilhelm II to Istanbul in 1898. This was the first thing we saw as we reached the area. We admired the beautiful mosaic work on the inside of the dome before moving on. This juxtaposition of new and old disturbed me, until I realized the tragic hubris behind it; Kaiser is cognate to Caesar, and the same hubris would fester for forty years in a dream of a doomed “thousand year empire”. Planting this fountain here in the center of Constantine’s city must have been a political statement.

At the founding of Constantine’s city, this was the stadium where the emperor watched chariot races along with the rest of the city. It was said to be decorated with statues of the Roman gods, wild animals, and creatures out of legends which were brought from across the empire. Interestingly, in medieval times, after the custom of chariot races had disappeared, this place was still a center of social life, and people began to attribute supernatural powers to these statues. The famous gilded bronze statues of the horses which once stood here were looted by Venetians in the 13th century, and now stand in St. Mark’s square in Venice. Interestingly, this was taken to Paris by Napoleon, and placed atop the arch of the carousel, before being returned after his defeat at Waterloo. 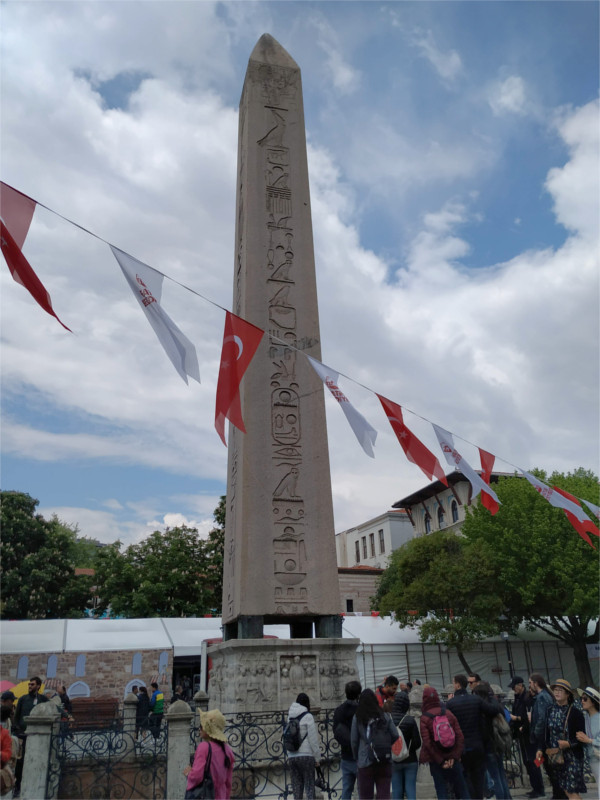 Only three decorations from the early centuries remains in the Hippodrome. One of them is the serpent column which you see in one of the photos above. It was first erected in Delphi to commemorate the Greek victory in 479 BCE over Persia in the Battle of Platea, and brought here around the end of the 4th century CE. It wasn’t erected in a sunken pit though. The pit is part of the normal process of building up a city over centuries. The bottom of the pit is the level of the chariot races of the 4th century CE. The past is always buried under a new layer. We got a better feel of this gradual burial of the past when we walked down a sloping road at the north-eastern end of this vast plaza and passed the curved south wall of the old hippodrome. The second decoration is an obelisk from the Theban temple of Amon, which is one of a pair. One was taken by Constantius in 357 CE to be erected in the Circus Maximum in Rome, the other was brought here by Theodosius in 390 CE (photo above). The third is called the Built Obelisk, and is the one in the foreground of the featured photo. An article by Sarah Guberti Bassett explains very lucidly the symbolism of political power expressed by these.