A bright green spot flew in front of me and landed on a tree which gives a characteristic redolence to this time of transition between sharad and hemant, the night-blooming jasmine (Nyctanthes arbor-tristis, parijat in Hindi and Odia, shiuli in Bengali, xewali in Assamese). When it landed I could see that the shiny green spot was a green jewel bug (Chrysocoris stollii, aka the lychee shield bug). I haven’t identified any of the other 450 jewel bugs, so I can’t be certain. But this had characteristic markings, and the colour, of what I was told was the C. stollii.

Of course one can do better these days, I realized as soon as I wrote that sentence. A little search with the help of google mamu told me quickly that the markings on the back were not of the C. pulchellus or C. patricius. I’m glad I did that check, because I found that in 2017 I’d posted misidentified photos; those smaller bugs were probably C. patricius. I’m also pretty certain now that this is not the C. purpureus, since that should be purple, as its name suggests. Could it be the C. hahn? The pictures I came across are confused, and I can’t figure out whether this is different. But let me go with C. stollii, for now, especially since it is supposed to be the most abundant of jewel bugs in India.

So what do I know about it? It is a bug, not a beetle, although the green shield could mislead you. If you look carefully, you’ll see that there is no mid-line parting on its shield; a beetle will have a divided back. You can also try to distinguish them by counting the number of segments on legs and antennae. Since it drinks sap from plants, it is considered a pest. My fund of knowledge runs out pretty fast. I must look for more bugs, this is a season for insects anyway.

The seasons keep changing. Varsha, sharad, hemant… How gender imbalanced! Four seasons give names to men: Sharad, Hemant, Shishir, Vasant. One to women, Varsha. And no one names their babies Grishma. Anyway, the pandemic which started in vasant has now lasted till the change between sharad and hemant.

This is the time of the year when this night-flying butterfly makes an appearance. Like all its cousins, the moths, it is lured indoor by our lights. You would have a hard time telling this wet-season morph outdoor at its normal perch among rotting leaves on the ground. The dry season morph is equally invisible among fallen dry leaves. I suppose it is the humidity during pupation that determines which morph emerges from the chrysalis.

But mostly this is a time when moths fill your house. In recent times in Mumbai I’ve been seeing a lot of the underwing moths, their drab upper wings closing over bright orange hind wings as they come to rest. But here are three beauties which I haven’t been able to identify. They are all small, between half a centimeter and half an inch! The photos show their sizes relative to each other accurately. You need magnifying glasses or a macro lens to examine them, but it pays off. 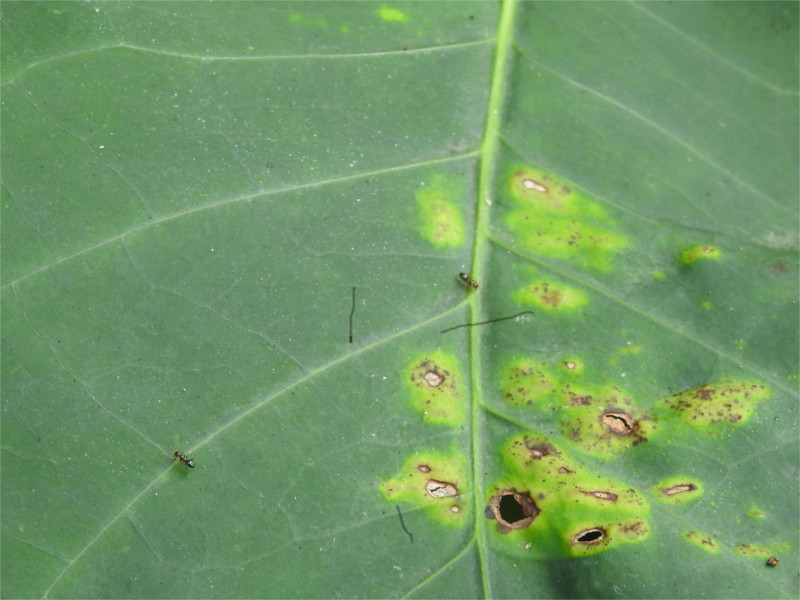 On a walk through a wet and sunny garden I remember the poem that made Dylan Thomas famous.

The lips of time leech to the fountain head;
Love drips and gathers, but the fallen blood
Shall calm her sores.
And I am dumb to tell a weather’s wind
How time has ticked a heaven round the stars.

More than half a year at home; thrown back by two generations, into a time when infectious diseases could kill you. Almost a year since I traveled out of India. But the seasons change as usual. Varsha has given way to sharad, exactly as the calendar dictates it will. The motion of our world around the sun drives the seasons. The nuclear fusion that powers the world’s most destructive bombs powers life. Walking under trees you see death and life.

I turned the leaf over, and under it a caterpillar had drawn a cocoon around itself. A butterfly will emerge in days. 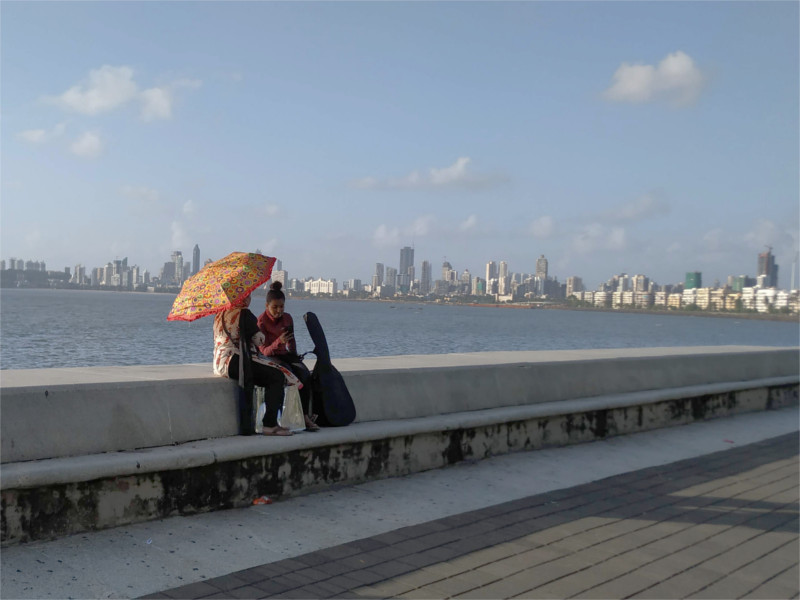 The weather is clearing up slowly as the monsoon dies down. Brilliant sunshine and no haze is the order of the day right now. On Saturday afternoon The Family and I decided to go for a walk to Marine Drive; we’d not seen it for six months. It was different. Not very crowded. People were mostly masked. These two youngsters without masks looked so much a throwback to earlier times that they gave me a twinge of nostalgia. I know that they should not be doing this, but I can hardly blame them. At their age you think you are immortal. I don’t want to take that away from them, though I hope they have sense enough to mask themselves when there are more people around. 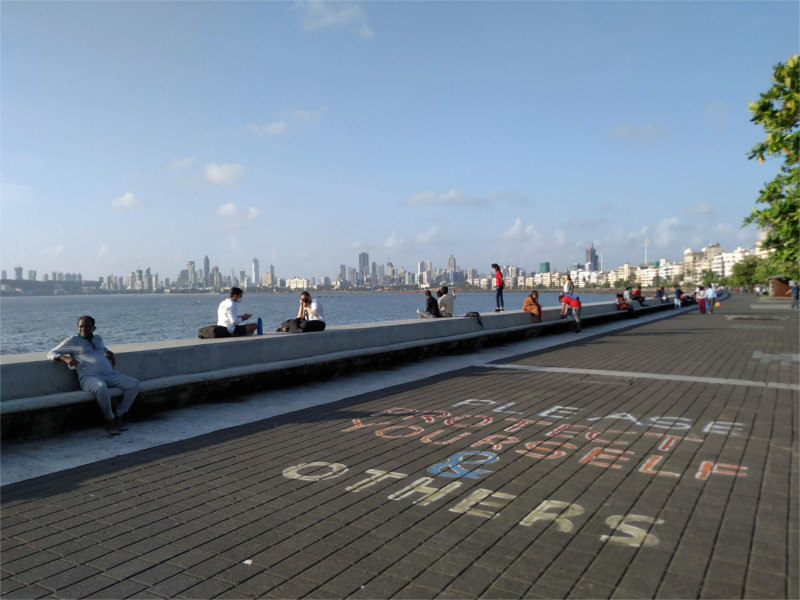 There are reminders chalked on to the promenade. People took photos. I took one. The Family, who has been reading newspapers more regularly than me, told me that it appeared in the papers some days back. I think it is heartening that so many people are obviously being sensible. Hospitals are no longer over-run. The result is that the fraction of deaths in hospitals is decreasing. I’m sure many people are not getting themselves tested, and the actual number of deaths will only be tallied by historians in future. But the epidemic is destroying the country in other ways: jobs and incomes are lost, other diseases are unchecked, school meals have been stopped, less well-to-do children are missing school because they can’t go online. It’s too depressing to think of during a lovely walk by the sea. Let’s go back to admiring the view.

The weekend was bright and sunny. It was the first weekend of the month of Ashwin, the beginning of the season of sharad. It was warm and humid, as you might expect of a season which the British called an Indian summer, but the blue skies were fantastic. In the 4th century BCE, the Sanskrit play, Mudrarakshasa, described sharad as the season of white, of inner beauty. On a walk with my camera, these champa (Plumeria alba) flowers against the gentle blue sky seemed to be the essence of the new season. The skies will be grey again, but eventually give way to this blue.

When I went to sleep last night the oppressive humidity of the afternoon had given way to a cooler breeze which brought rain. I woke to a clear morning. The sun had not yet cleared the horizon, but the orchestra of birds was in full swing. A coppersmith barbet supplied the metronimic rhythm as the competing trills of green bee-eaters and purple sunbirds rose over it. The parrakeets joined in, and I thought I could hear an Alexandrine call amongst the rose-ringed.

I made my tea and looked out. The break in the clouds was the promise of the approach of sharad ritu, that interval before autumn that the English named an Indian summer. The sky was a blue that was almost impossible to see in Mumbai since the 1990s. The anthropause has made a big difference to the quality of the air. The crows had just begun to get into the swing of things. I was always a night person, more familiar with the late rising constellations than sunrise. But I’ve begun to enjoy this interval between sunrise and the start of human activity.

Sharad follows varsha. Sharad is often translated as autumn, but this is incorrect. It is still astronomical summer in the northern hemisphere at this time, the sun has yet to cross the equator on its southward trend. This is what the British called Indian summer. It is an uncomfortable time, since the monsoon has left the air full of moisture, and the weather warms up again. At this time the weather in the Himalayas is turbulent, there are dramatic cloudbursts and floods, and passes are closed. But also this is a time when nature reawakens in the plains, with warmth and water in plenty. On the coast the monsoon storms have passed, the time of the spawning of sea life is over, and traditional fishermen take their nets out to sea in newly painted boats. The featured photo was taken in Goa.

On land, I would scour the countryside in this season with my camera for wildflowers and insects. This photo of a chocolate pansy butterfly (Junonia iphita) was taken in the comfort of a garden. Even here photographing insects involved keeping a steady hand on the camera if a mosquito bit it just as you were about to release the shutter. When you look around you, it is clear that sharad is not autumn. Nature is bursting into renewed life. The fruits of this season are specially sweet and flavourful, the late medieval imports of chikoo (Manilkara zapota, also called sapodilla, or sapota), sitaphal (Annona squamosa, known elsewhere as sugar apple), and Cape gooseberry (Physalis peruviana, which has no local name although it is so widespread). I love these fruits just by themselves, or in jams and ice creams, or in rum based drinks. 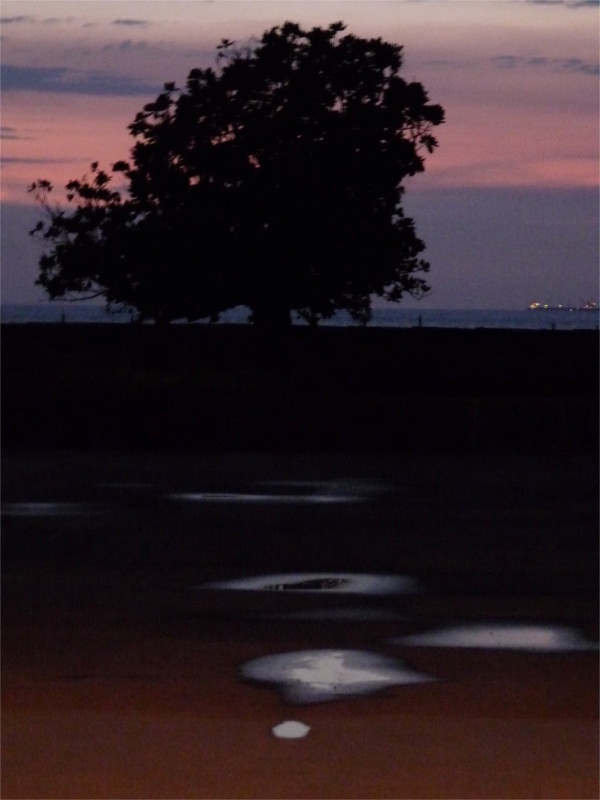 But most of all, this is the season of festivals. It starts with the Ganapati festival, and culminates with the Navaratri, or Durga puja. There is an almost continuous stream of festivals from Ganapati to Christmas. It is a part of the year when your resolve is badly needed. The weather is uncomfortable, and you are tempted to forgo the daily exercise that had almost come to a halt in varsha. And now there’s the tempting food, from the wonderful fresh catch of pomfret (Bramidae, also called pamplet or paplet) to the special sweets of the many festivals. Everything conspires to force you to put on weight. It’s the season to be careful.