We walked up the central avenue of what is today called the Sulai bazaar to the Achyutaraya temple. During the time of Achyuta Deva Raya (1530-42 CE), when this was built, the bazaar was called Achyutapete, and the temple was called after its deity, Tiruvangalanatha. The shops in the bazaar were well-ordered, placed in cubicles that line the avenue. We reached the area by walking along a paved route by the southern bank of the Tungabhadra. The axis of the temple faces due north, to the river. To its west is the Mathanga hill, from which a path leads down, and behind the complex, to the south, is the Gandhamadhana hill. 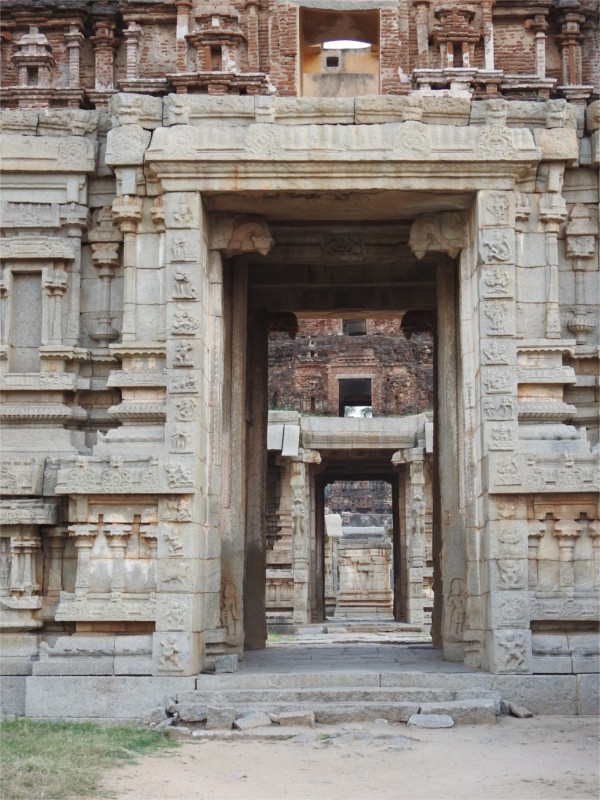 As we came to the main gateway, the gopuram, it became clear what a grand temple this was. There were two gateways leading in, so there must have been two rectagular prakaras completely surrounding the temple. Inside the inner rectangle we could see the ornate outer maha-mandapa. One of the characteristics of the Vijayanagara style is the brick and mortar super-structure over the granite gateway. Religious architecture tries to build upwards, and the southern Indian style has been to build impressively tall gopura surrounding significantly lower temples. Although much of the upper brick structure of this temple is now gone, we could see the ruins of this style here.

Only fragments of the outer prakara now remain. The inner prakara seemed quite complete, as you can see in the photo above. Apart from the northern gate, which we entered by, it has gates to the east and west. From a path worn through the grass it is clear that a large number of people reach the temple by climbing down from the Mathanga hill, and entering from the western gopuram. Interestingly, the worn trace of human feet leads straight from the western gate to the northern. So it seems that most visitors just come for a walk, and not to see the still-beautiful ruins of this once-grand temple. 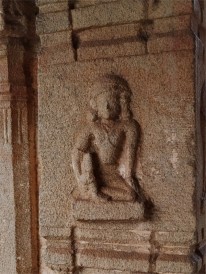 I’ve remarked on the oddities of Vijayanagara architecture before: for example the roughly dressed stones of imperial works versus the perfectly shaped blocks seen in temples. Another oddity is the change in the slenderness of pillars. The early Vijayanagara temples had pillars with slenderness ratio of 20, about the best that you can do with stone. Tis late era temple had pillars with slenderness ratio of about 6, comparable to Stonehenge! I don’t know what caused this change. But these squat pillars present a large surface for the low relief sculpture that you see everywhere in Hampi. These have a preoccupation with certain themes: yogis and dancers, elephants and cows, chimeras and ducks, celestial dancers and scenes from daily life. 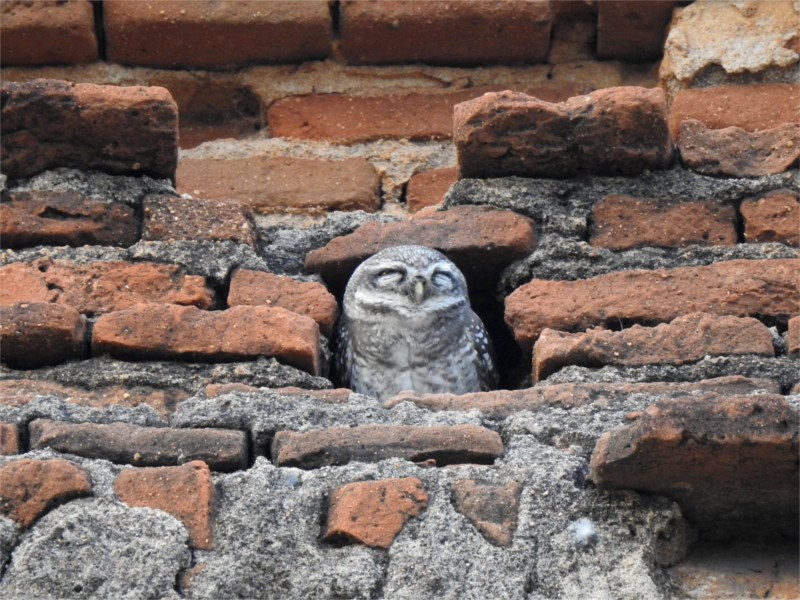 One reason could be the landscape forced architects to work with granite. Granite is one of the hardest of stones, and requires corundum or diamond to work it. Vijayanagara had extensive diamond mines, so finding flawed diamonds to sculpt stone with may have been possible, but cutting and shaping it would have been hard, even with high quality steel. Materials could easily have shaped the architectural style. As I was lost in these thoughts, The Family spotted a pair of spotted owlets (Athena brama) nesting in the hollows in the brickwork of the gopura. The light was beginning to fail, but the owlets still looked sleepy. Sadly we could not finish exploring the full complex; we did not visit the shrine to the goddess at the back, preferring to go back before it became completely dark.

On the way out I paused to take a photo of the outer gopuram. Even without its top, it looked really impressive in this last light of the day. You can see the ruins of the orderly rows of shops in the Sulai bazaar beyond it. There was a guard outside, excitedly telling everyone who passed by about a leopard which he’d just come face to face with. It didn’t look like he was telling a story to hurry visitors away, and in any case we were in open country near a protected forest. Even if he had made up the story, the lack of lighting in this area was enough to drive us away. 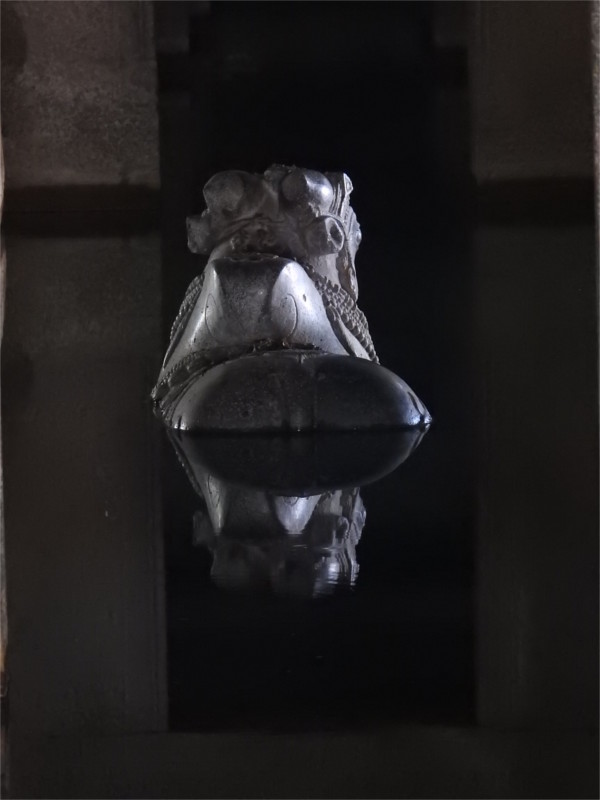 The ruins of Vijayanagara are still being excavated in Hampi. Among the buildings which have been excavated is a structure only known as the large underground Shiva temple. A flight of modern steps leads down to the level of the temple. Since it was buried, the superstructures have disappeared, and not been recovered. Around the main corridor leading to the inner sanctum are the usual pavilions. This has been a year of heavy rainfall. So the water table was high when we visited, and many parts were not reachable. The Nandi statue which faces the innermost sanctum of a Shiva temple was partly under water, so we could not proceed. In spite of the smell of bats, the stagnant water, the gloomy light, the temple had a charming atmosphere.

The Archaeological Survey of India’s booklet on Hampi describes this as an early-type construction because of the shape of the pillars: a square base with an octagonal body. What struck me as interesting here is how slender the columns are. Engineers are fond of quoting a measure called the slenderness ratio, which is essentially the height divided by the diameter of a column. I estimated that this pillar has a slenderness ratio of about 20. This is about the same as that of Cleopatra’s Needles in Paris or London, or the wonderful late 12th century CE Chola temple of Airavateshwara near Kumbakonam. If this is indeed an early temple, perhaps 14th century CE, then it is possible that the thrid or fourth generation descendants of artisans from the Chola heartland further south came here to build this temple. To my eye it seemed that later architecture in Hampi built higher, but had lost the technique of building slender. It would be interesting to try to correlate the slenderness of columns with independent dating of structures in Hampi.