Our culture is changing so rapidly now. Some of it is bad: a constant worry, leading to a tendency to be prescriptive in our little lives and dictatorial in powerful circles. But others are wonderful. The Family and I are in much closer contact with our globally dispersed families.

Apart from calling more often, we have family meals together at least twice a week. We find ourselves having dinner as others join us on video with an evening’s tea, or an elaborate afternoon meal, or a mid-morning break for tea, or even brunch. Sometimes these are formal occasions, where everyone dresses up (except an occasional hilarious couple who have just woken up and appear looking disheveled). We chat about our daily lives (I’d never pickled onions before), while the children run around and come up now and then to monopolize the conversation for a bit (they have seldom had such large audiences). Sometimes two or three of us wander off for a private phone chat, and join the conversation later. It is all a bit like a messy family weekend that I remember from my childhood.

Giraffes really stand out on the plains of East Africa. From the distance their spindly legs and slightly-bent-forward necks make them loom over the horizon like distant oil pumps busy sucking petroleum out of the earth. But what a difference when you get close! You see the elegant neck, the long nostrils, the hooded eyes and the long lips which grasp and strip leaves from branches of thorny acacia trees.

I was busy taking another copycat photo of a lone acacia tree on the East African plains, with a giraffe walking towards it. I peered intently at the faint line of white above the horizon. The Family had pointed it out earlier, while I was busy looking at other things. Was it a line of distant mountains? Probably not, I concluded. If the weather had been clear enough for a sight of Kilimanjaro, it would have been in a different direction. Also, nothing around it was high enough to be clad in snow. Probably clouds, I thought. While I was busy with this, MONT and The Family had discovered a group of Masai giraffe (Giraffa camelopardalis tippelskirchii). One could tell by the fact that the dark patches on their flanks were star shaped and grew lighter from the middle outwards, and they proceeded most of the way down their legs. FONT counted six. The Family repeated the count and found seven. MONT counted again and found nine. There were actually nine that we could see, apart from the lone animal which I’d been photographing on the other side of the road.

I’d read somewhere that male Masai giraffe eat twigs from the top of a tree, whereas the female prefers the lower branches. I couldn’t see any such clear difference between the individuals. So were they all male? It seems there is another way to tell the sexes apart. A male’s mane stops before it reaches the head, whereas the female’s continues so that the head is covered. This group was all male. I was to find later that giraffe herds can be all male, largely female and calves, or mixed, and the composition of the herd is not fixed. So, while giraffes socialize, they are not as social as elephants, hyenas, or apes. This group seemed comfortable with each other, and browsed together as long as we watched, without seeming to communicate.

I saw baboons for the first time in Amboseli national park, but again I felt as if I’d come on something very familiar. Going by the geographical range, these would be yellow baboons (Papio cynocephalus). The troop was foraging around the path of a herd of elephants on the move, and neither seemed to pay any attention to the other. Some troops of baboons in Amboseli have as many as a hundred members; this was small, with perhaps around ten members. They seemed to forage independently, but they never moved very far from each other. 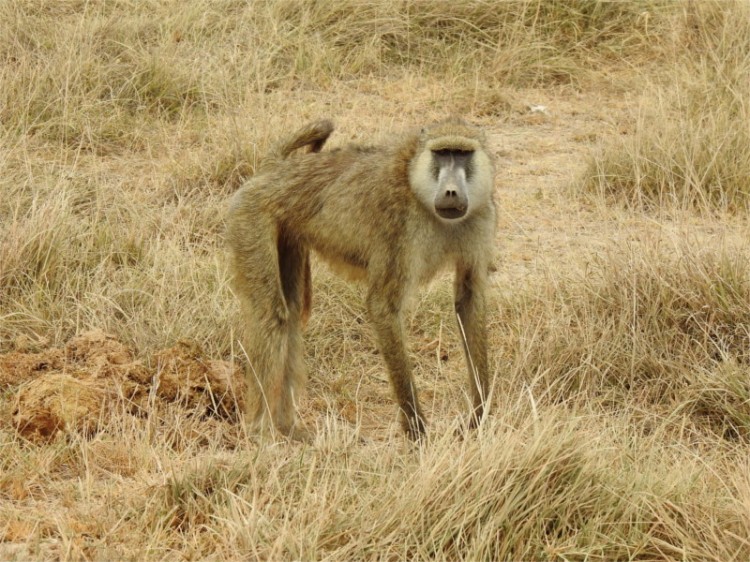 In fact, through their whole life, females never move more than a few hundred meters from each other. As a result, a lot of their mental effort goes into maintaining good social relations. Interestingly, females are able to tell maternal and paternal sisters, and cooperate with them. This perhaps means that although both sexes are promiscuous, they track matings very closely. Males may move from one group to another, to increase their chances of mating, and, as a result, are more competitive. The behaviour of baboons seems to be a simplified model of human behaviour; so I was surprised that I could not find any folk stories about baboons from the tribes of Kenya. Maybe I need to search harder. 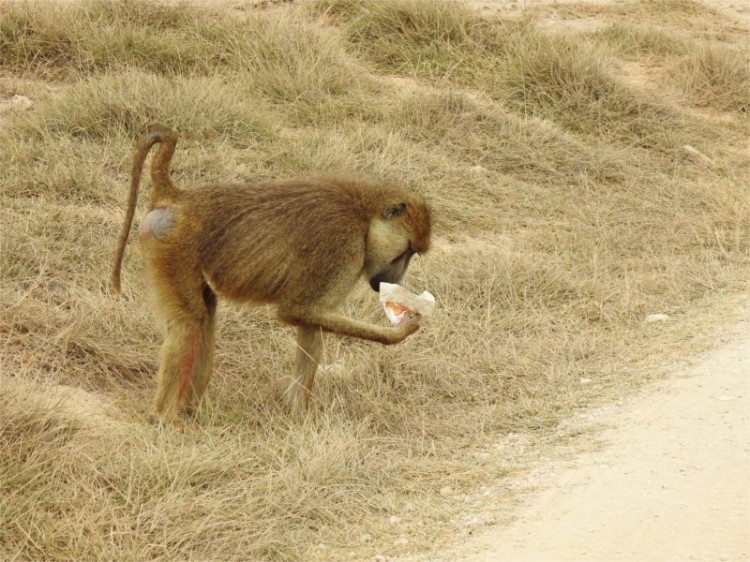 It seems that baboons will eat anything at all. The technical term for it is “opportunistic feeding”. I saw an example of this as a baboon picked up a paper napkin discarded by the side of the road from a passing vehicle. It sniffed at it briefly and then put it down again before moving off. I wondered whether baboons depend on the sense of smell more than sight. As opportunistic hunters of small game, their eyesight must be very good. But sniffing at a potential item of food seems to indicate that the dog-like muzzle might harbour an acute sense of smell.

Anthony spotted something interesting, told us that he was going to move, and took off rapidly. I saw a line of dust raised by something running across the plain in the distance. Father of Niece Tatu was quick. “Hyena”, he told us. Another line of dust followed the first. The Family was looking at them through her binoculars. The road curved around and by the time we had come close to them, they had crossed the road and were running away from us. I took a photo, but it wasn’t very good. But a third one came running from the same direction. This time I was ready for it. As I took photos, this one did something more interesting than just run. It came to a halt, spooking a bunch of zebras. It wasn’t interested in them. It looked around, looking a little lost. It spent a long time looking around, and then turned and loped back in the direction it had come from. What just happened? I have the story in the slideshow below, but can’t figure out why the hyena did what it did.

The hare wanted to steal the hyena’s cows. So he made up a story about a stone and a panga which had to be delivered to someone far away, and sent the hyena off on the errand. While he was gone, the hare stole the cows, cut off their tails and stuffed the tails into the ground. When the hyena came back without being able to find anyone who wanted the stone and panga, the hare told him that the cows had got stuck inside the earth. They pulled at the tails together, and they came out without the cows. The hyena did not suspect that the hare had stolen his cows.
—Kikuyu folk tale

The spotted hyena (Crocuta crocuta) once ranged across Asia, Europe, and Africa. As habitats were remade by humans over the centuries, it became extinct over most of its range. It can now only be seen in protected areas in Africa, although it is not yet classed as endangered in any way. Of the many interesting things about spotted hyenas, what intrigued me most is their complex but hierarchical social organization. They form large clans, with female dominance. Reversing the organization of chimpanzee troops, even the lowest ranked female outranks the highest ranked male. Rank is not maintained by aggression or size, but through networks of allies. Rank is passed on to offspring, so that the daughters of the highest ranked female come higher in rank than other females. Field studies find that hyenas are able to recognize fairly distant relatives, and may act less aggressively towards them. Quite contrary to this is their behaviour towards siblings, which is extremely violent, with dominant females killing sisters soon after birth. Throughout the animal kingdom, the biggest driver towards intelligence that we see is a complicated social behaviour. The hyena is no exception; some believe that it is more intelligent than chimpanzees. Hunters’ stories quoted as evidence of this have been partly verified by laboratory observations on learning and cooperation. It seems that its traditional reputation of being stupid, evidenced in many African folk tales, is quite mistaken. The little drama that I observed on the dusty plains of Amboseli national park was very likely a part of a long story of cooperation and rejection.