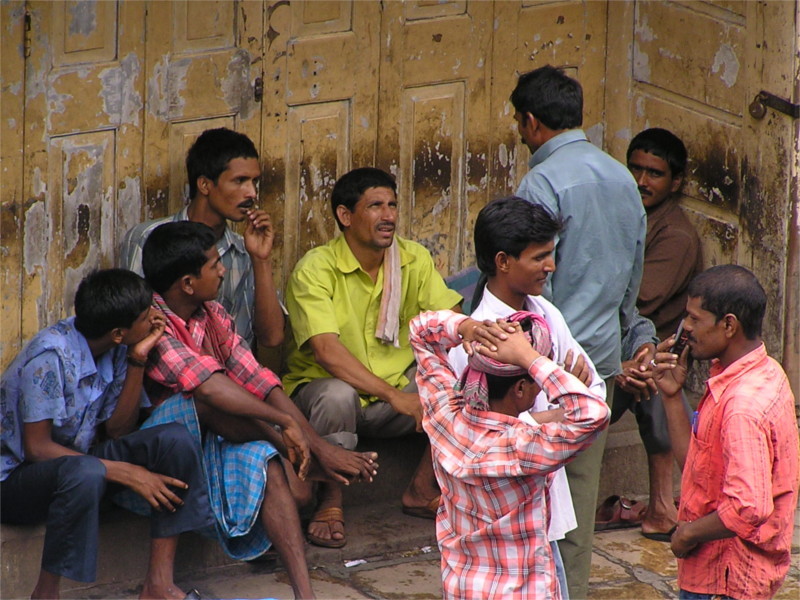 I woke up to a gloomy day. it started raining as I made my morning’s tea. Cyclone Burevi had passed well south of us a week ago. I pulled up the satellite images and saw that this was a big cloud mass which had moved in from the south west. There go my plans of spending a night watching the Geminid meteor showers. Depression has multiple meanings! I opened a folder of photos from the middle of a monsoon more than a decade past, and came across a set of street photos I’d taken on an Independence Day. In the featured photo a group of labourers spends their day off chatting. I liked the closed wooden door behind them, and the way they had arranged themselves.

It was a holiday. Most shops were closed. Some had the old style wooden shutters, others had the metal rolling shutters which double as space for advertisements. This was clearly an amateur effort, a little cluttered, but in keeping with the surroundings. I think I like the wooden doors more.

Not all businesses have to close even on a holiday. This pair with a fruits and juices cart was getting some punters. The man with the push cart was also going off to work. He seemed to be a regular customer, greeting the juicewallah in passing. I’d found an open space two floors above the street for these photos. It allowed me to look around without intruding on the life of the street.

When I came down to the street I found this cat sitting in a corner where it thought it was not under surveillance. Friends! had wound up a few years back, but Phoebe’s song Smelly Cat came to mind.