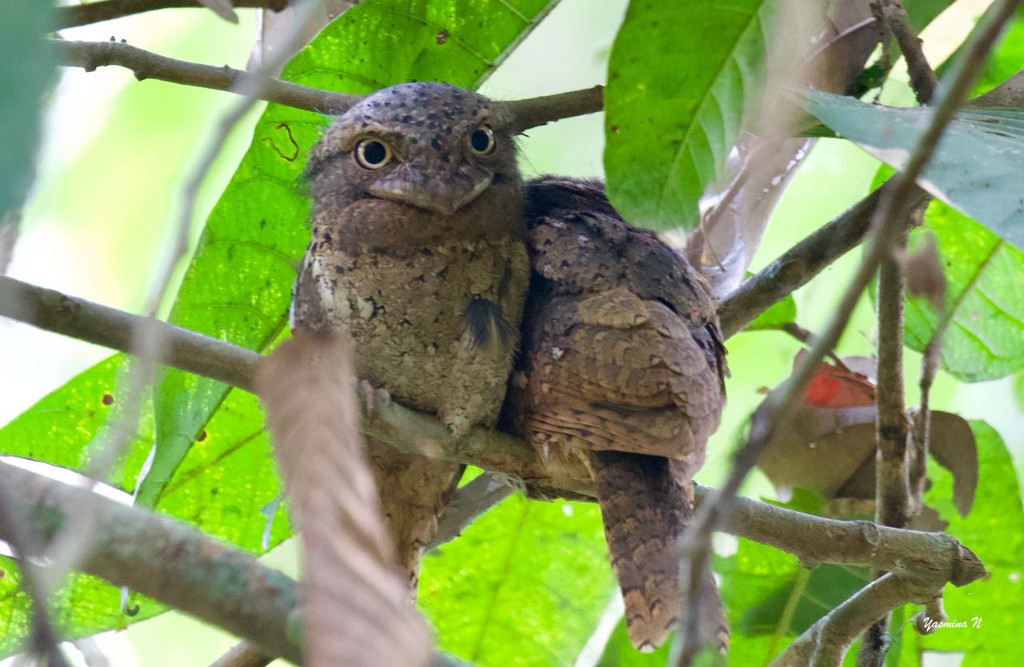 Frogmouths were in my bucket list. With their distinctive extra-wide mouths and pointed beak, they have to be on every bird watcher’s list of things to be seen. The Sri Lanka frogmouth (Batrachostomus moniliger) is the only one found in India. The nocturnal birds are hard to spot during the day because they are beautifully camouflaged as a mass of dry leaves, and usually sit in the shade under a canopy of a tall tree. As more birdwatchers become aware of it, it is being seen fairly far north in the Western Ghats; in 2012 it was even spotted in the Sanjay Gandhi National Park in Mumbai. Fortunately, they are creatures of habit. If they aren’t disturbed then they could come back to the same tree year after year. A good local guide will usually lead you to a pair fairly quickly.

“Look around. Even if the trek is slow don’t worry. Record everything you see. Closely watch dry trees and dry leaves, the Frogmouth may be hiding there.” — Salim Ali (1976) to R. Sugathan, who rediscovered the Frogmouth in Silent Valley, Kerala in 1976.

In Thattekad, at the edge of the protected rain forest, we saw lots of insect eating birds during the day: drongos, woodpeckers, bee eaters, and so on. At night the air would become full of insects. So it made instant sense when Adesh began to talk of nightjars and frogmouths, nocturnal birds which feed on insects. I would have loved to see frogmouths flying about with their gaping mouths open, hoovering up swarms of insects. When I looked up family relations between these birds I found that DNA studies place frogmouths, nightjars, swifts, and hummingbirds together into a group called Strisores. Interestingly, these form a group of birds which diverged very early from the rest of birds, perhaps as far back as 70 million years ago! The night really calls strongly to this group.

I looked at the photos taken by J. multiflorum (one of which is the featured photo) and noticed the abundant facial bristles. What use are they? I could not find anything written about the function of these bristles. So little is still known about these birds! My last sighting of the day was of the legendary field biologist, R. Sugathan, who rediscovered the frogmouths in Kerala in 1976. He was sipping a coffee as we walked past, and pointed out an uncharacteristically silent racquet-tailed drongo.