I stood on the corner of 7th Avenue and 58th Street and gawked at dragons. Were they really dragons spewing fire? They were a little too awkward for that (featured photo). And what was that crown doing on top of their heads? 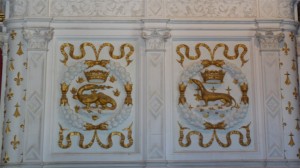 Eventually I remembered where I’d seen this before. It was the salamander, the symbol of Francis I of France. I had seen it before in Chateau de Chenonceau, in France. That’s in the left half of the picture on the right. The fleur-de-lis, flowers of lily, pattern behind the salamander were meant to evoke French royalty as well. This repurposing of the 15th and 16th century France was the key in the fantastic facade of the New York landmark that I was looking at.

Alwyn Court now houses the famous caviar restaurant Petrossian. But when it opened in 1908, it tried to be the most lavish apartment building of its time. The New York Times of the day noted that these 14 room, 5 bathroom apartments, which cost USD 10,000 a year, could be “just as palatial as private houses, but needed half as many servants.” Today, an advertisement says, a two room apartment is available here for USD 3,150,000. At the posted cost per square foot, one of these two room apartments would have an area of a bit more than 1500 square feet.. The change happened in the 1938, when a bank bought the building and partitioned it to create 75 apartments where there had been 14 earlier.

I walked around the entrance peering at various details of the terra cotta decorations which make up the facade. The corner on 58th street is now a landing place for rickshaws. There were three parked there, and as I took my photos, two more arrived to let off tourists. When Walter Russell and Alwyn Ball bought this plot in 1907, 7th Avenue was already a posh address. The brief given to the architects, Harde and Short (yes, really!), was to build a “studio palace”.

The idea was to project this as a cheaper alternative for the rich (less servants, for example). The terra cotta facade was part of this drive. The motifs are repeated throughout the 12 story facade. One mold would give as many salamanders as necessary. At the same time, terra cotta could be easily worked into beautiful shapes: the curling leaves and wonderfully moulded figures that you can see in the photo here. Fire safety was another corner snipped out of the design, and nearly led to a disaster in two years.

As I admired a facade which had been called one of highest excellence “if made by a pastry cook”, other tourists joined me. Many were more knowledgeable; one of them pointed out the completely useless niche (which you can see in the photo above) as a weak point in the decoration, since rain water could collect there and drip down slowly over the rest of the frontage. The building does not seem notable for any architectural advance. The sheer exuberance of the facade is enough to have earned it a place in the list of notable buildings in New York City. I thought my walk was not wasted.