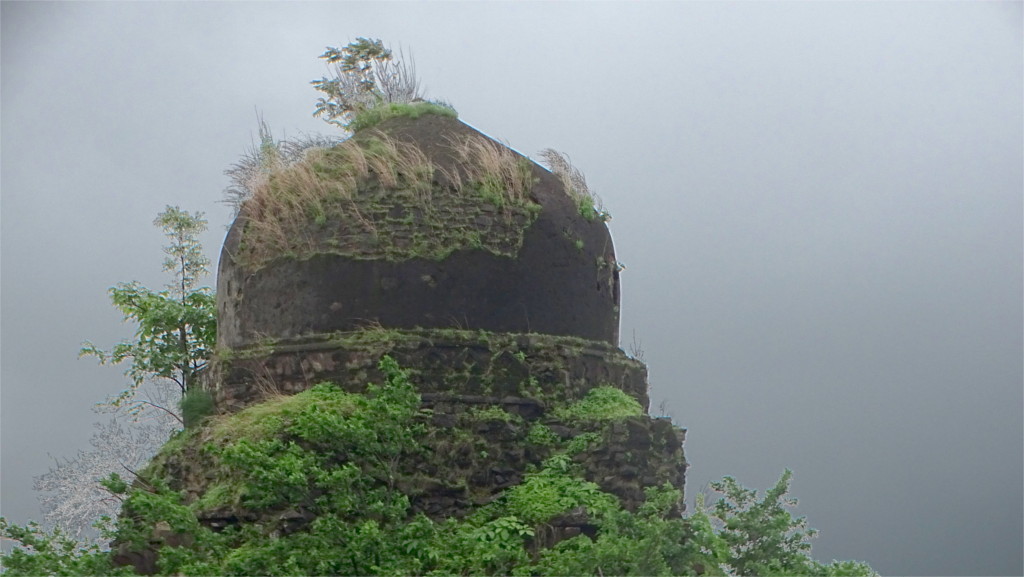 For someone like me who lives in an expanding city, it is an interesting experience to visit the capital of a vanished kingdom. Mandu is one such; a citadel and its surroundings have fallen to ruin. A capital city has reverted over centuries into a tiny village. That village has begun to expand again as tourists come in, although it will never grow to the size of the ancient capital. Flung away from the central monuments are the forgotten little tombs and crumbling walls, falling slowly into ruin. Far away from the citadel, the fog lifts, although the July sky remains grim and threatening. So far from the center of the city that once was, any tomb would be that of a minor noble, at best a footnote. A person described by T.S. Eliot as “an attendant lord, one that will do to swell a progress, start a scene or two”. Six centuries later, the name of the person buried in this tomb is forgotten.

I stopped the car to take some photos. I had half a mind to walk up to the ruins, but the ground seemed too squelchy after the rains. I walked along the road and took a couple of photos. The Family resolutely ignored me and remained deep in communion with her phone. The half dome on a drum over a ruined base was very much in the style of the Indo-Afghan architecture in Mandu. Ruins of this kind always bring to my mind one or another English romantic poem. Byron’s words about Newstead Abbey ran through my mind, “Through thy battlements … hollow winds whistle, thou … art gone to decay. In thy once smiling garden the hemlock and thistle have choked up the rose which once bloomed in the way.” It wasn’t too appropriate; there were no battlements, and the vegetation was different, but the spirit seemed about right.