“Why don’t we have lunch in Kausani?” The question came up at breakfast. We would check out soon, and the drive was a short one. We’d got in late the previous evening. It seemed like the right thing to do. I remembered Kausani as a busy little town, and it had been a long time since we had seen a town, little or big. We set off towards the center of Kausani late in the morning.

It was a ghost town. A large plaster statue of a blue Shiva dressed in skins looked down at the empty bazaar in the middle of town. Lots of empty cars were parked around the junction of roads. Very few people passed by. A general store was open, a couple of ATMs, many restaurants were open and empty of customers. I walked up to the man lounging at the base of the streetlight at the very center of the town.

I’d not seen a single customer come to him, but he was very cheerful when I asked him what he was selling. Local herbs for your home garden, he said. “I’m not buying anything now,” I explained, “I just want to look.” He didn’t mind. I recognized coriander. He held up a couple of other seedlings which I hadn’t seen before. “Used in cooking,” he explained, helpfully un-enlightening. He had a plot of land just outside of town, and managed to sell a few of these every day, I gathered.

Across the street a sweet shop was just going through the motions. The owner was looking out at the empty road hopelessly. His listless eyes met mine for a moment and then drifted away. He realized the futility of waiting for customers, and hadn’t even bothered to make enough sweets to display a full counter. The many open but empty restaurants around the bazaar was a reminder of the complete collapse of Kausani’s tourism dominated economy.

In spite of the hardships, construction work had clearly not halted in the neighbourhood. The one shop which was definitely open and doing business was a hardware shop, with a shed full of sacks of cement outside. The situation reminded me something I’d read long ago. Talking of export oriented economies, Raghuram Rajan wrote in his book Fault Lines, “Unfortunately, even as exporters like Germany and Japan have become large and rich, the habits and institutions they acquired which growing have left them unable to generate strong sustainable domestic demand and become more balanced in their growth.” Excessive reliance on tourism is similar.

One place had bucked the trend: a small bakery which I’ve written about before. Ramesh had to leave a job in a hotel somewhere abroad and come home for the pandemic. He opened this bakery, catering to a daily demand for bread, biscuits, and a continuous trickle of orders for birthday cakes. He and the baker were cheerful. Why do cakes sell but not sweets? There was a clue in the prices; cakes are more expensive. The pandemic had not been even-handed. The poor suffered more, many lost jobs and livelihood. Those who can eat cake have also lost, but haven’t been wiped out. We had coffee and biscuits as we chatted with Ramesh, and decided to come back for lunch later.

The village of Mandu was barely noticeable when we first visited eight years ago. We saw children swimming in the tank inside Baz Bahadur’s palace. We listened to a singer inside the halls of the same palace. We saw people working in the gardens and in the ruins. We saw a few bicycles, but locals mostly walked around the citadel. We could only get food in proper sit-down restaurants, and I remember feeling impatient at the amount of time it took them to get us a tea. The largest employer seemed to be the Archaelogical Survey, which was in charge of maintenance of the citadel. We saw many tourists, but most were from nearby, and had arrived by bus. 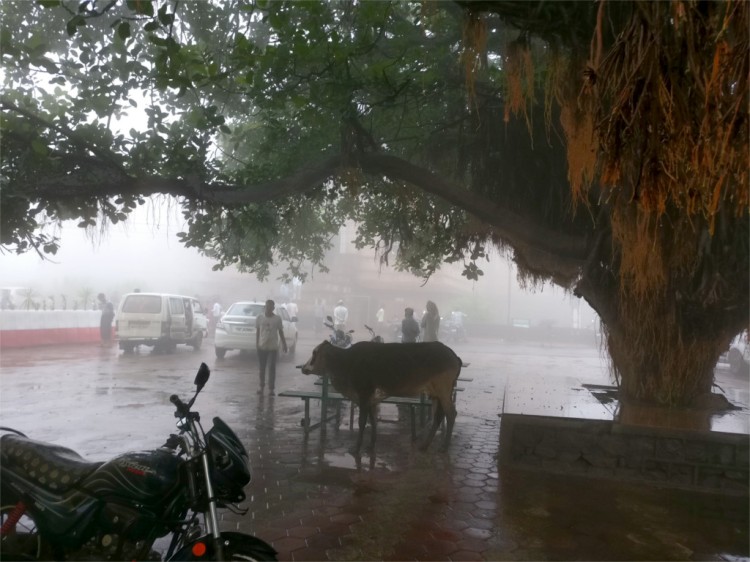 Things have changed a little. Outside the Jami Masjid we saw a line of food stalls. As we had chai standing in front of one, I took the photo which you see above. Motorbikes are now everywhere. We saw lots of tourists who had driven up there. The village now announces itself in rows of shops: we walked into one to look at Bagh printed cloth. The Archeological Survey continues to provide employment to many, but the tourist trade has opened up to accommodate the swelling ranks of the middle class. As a result, there is more money in the village now.