The common babbler (Argya caudata, formerly Turdoides caudata) is a bird which I find hard to recognize by sight. When they are in their usual noisy foraging group, I can tell them from their voice (the recording linked below was made by Peter Boesman) and behaviour. Among the babblers they have perhaps the longest tails, and they are smaller and slimmer than the other babbler species. Certainly, their call is sweeter than the querulous grating calls of the other babblers.

At the end of a day’s bording outside Jamnagar, as we drove along a country lane, we spotted a lone bird on a meswak tree. We stopped the car. All four of us had puzzled looks on our faces. What could it be? Eventually, The Family asked tentatively, “Is it a common babbler?” We sheepishly agreed, thanking our luck that the more experienced people in the group were not close enough to have seen this piece of rank amateurism.

We’d seen a lone common babbler earlier in the day and paused to recall how to identify it: small, long tailed, overall dusty colour, streaked head and back, and a very distinctive white patch below the throat. But when confronted with a small brown bird, we were like absolute novices. The torturer there could have let out a song to help us, couldn’t it? 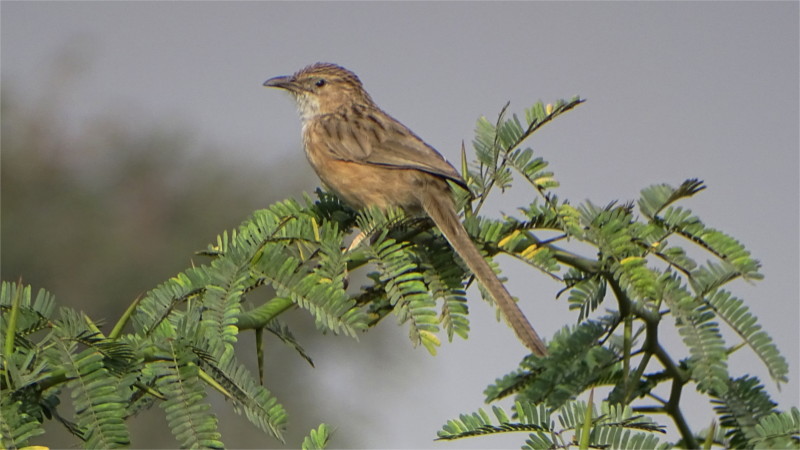 I head Mandar say “Common babbler!” By the time I finished whatever I was doing and turned to look at where he’d pointed, the bird was somewhere else. I could hear its chittering call, and found it was in a thicket of bushes. It was early January, and the branches were pretty bare. Once you saw the bird you would not lose it even though it was hopping around. The golden background and the red branches of the bush would make for a pretty picture, I thought, if only I could focus on the bird carefully. The result that you see below is fair enough, although I would have wished it to be a tad sharper. It was one of a small group, as is common with babblers. One of the birds soon flew to the top of a low tree, even closer to me, and I managed to get a good photo.

Had I seen it before? Very likely, although I was not totally sure (as an occasional birder my record keeping is terrible). I have the general impression that the jungle babbler (Argya striata, earlier Turdoides striata) is more common than the common babbler (Argya caudata, earlier Turdoides caudata). However, both are so common that population estimates cannot be found. The common babbler can be found below an altitude of 900 meters across India (I haven’t seen reports of sightings either from Bangladesh and the north-eastern part of India), and as far west as Iraq. It’s not a bird that I recognize out of the corner of my eye, like a house sparrow or a spotted dove. So I have a feeling I did not see it growing up.

There is a report of a range extension of the common babbler eastwards in India in 2013; this makes it seem possible that over my lifetime it has been colonizing new areas. It evolved during the hot period of the mid-Miocene, and inhabits tropical shrub-land or grassland, and also thriving in land degraded by humans. It is not unlikely that as we clear more land for houses and agriculture its range expands into these newly degraded areas. On the other hand it is more likely that I saw these birds but did not register them consciously when I was a child. But wouldn’t it be interesting if the common babbler were not so common at one time?