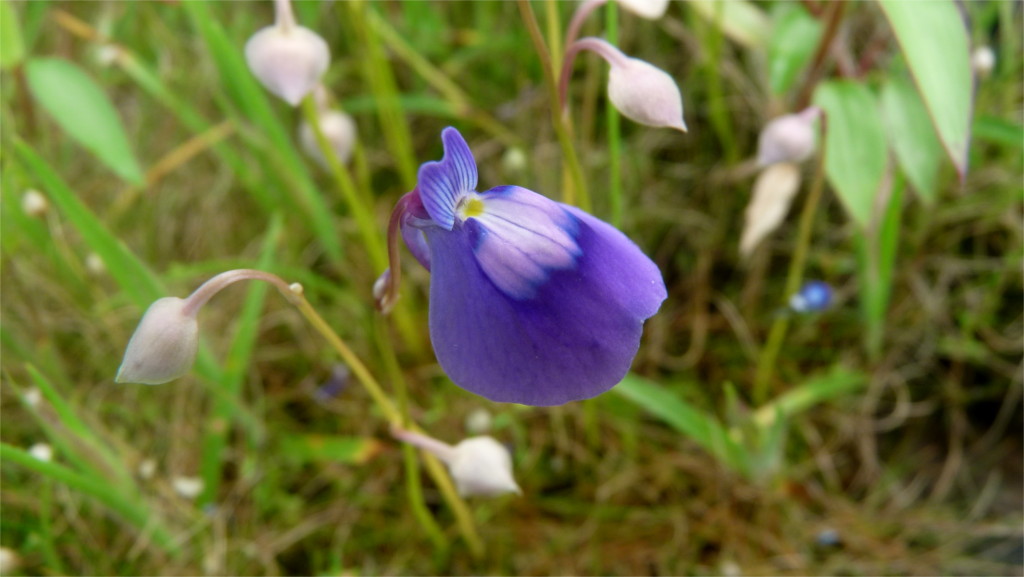 The bladderwort (called Utricularia by botanists) is the biggest family of carnivorous plants. In the Kaas plateau we saw large fields of purple bladderwort. The plant is aquatic: it floats on the thin film of water trapped above the stone of the plateau. The long stalks of the plants grow leaves at intervals. The bladders, which give the family its name, grow along the leaves and usually stay below the surface of water. Bladderworts are widely known to be carnivorous plants. Their bladders trap tiny invertebrates. I later found that this two hundred year old picture of carnivory may be wrong.

Plants turn to carnivory when the soil is poor in nutrients. However, they do not give up photosynthesis; their leaves are still green with chlorophyll. Carnivory gives the plant nutrients like phosphorus and nitrogen which are in short supply in the soil. The first blow to the idea of purple bladderwort being carnivorous came from careful measurements of the animals found in the bladders. These showed that at most 1% of the nitrogen and phosphorus that the plants need can come from the animals. 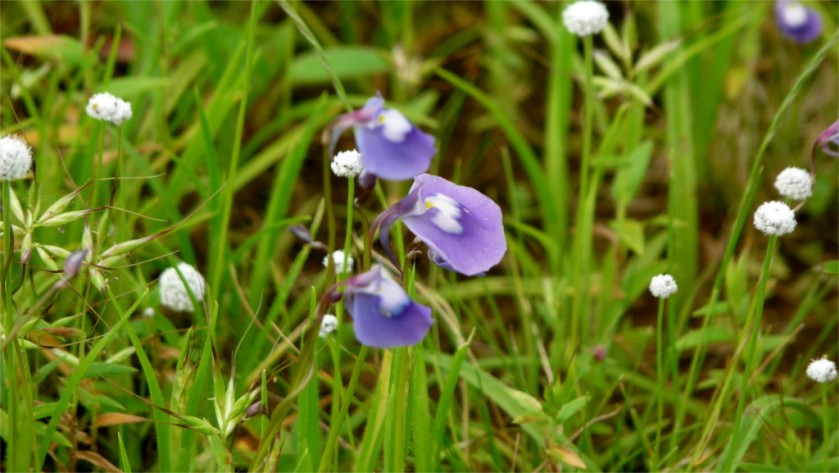 Yet more amazing is that each of the bladders seemed to contain a whole live ecosystem of the small invertebrates which were trapped. New bladders did not have them, and older bladders had more animals. So it seems that the purple bladderwort is not a carnivore. It must gain something else by sustaining this ecosystem inside itself. Unfortunately no one knows yet what the plant gains from this. But it seems that the purple bladderwort (named for the purple flowers you see in these photos) may not be a carnivore. 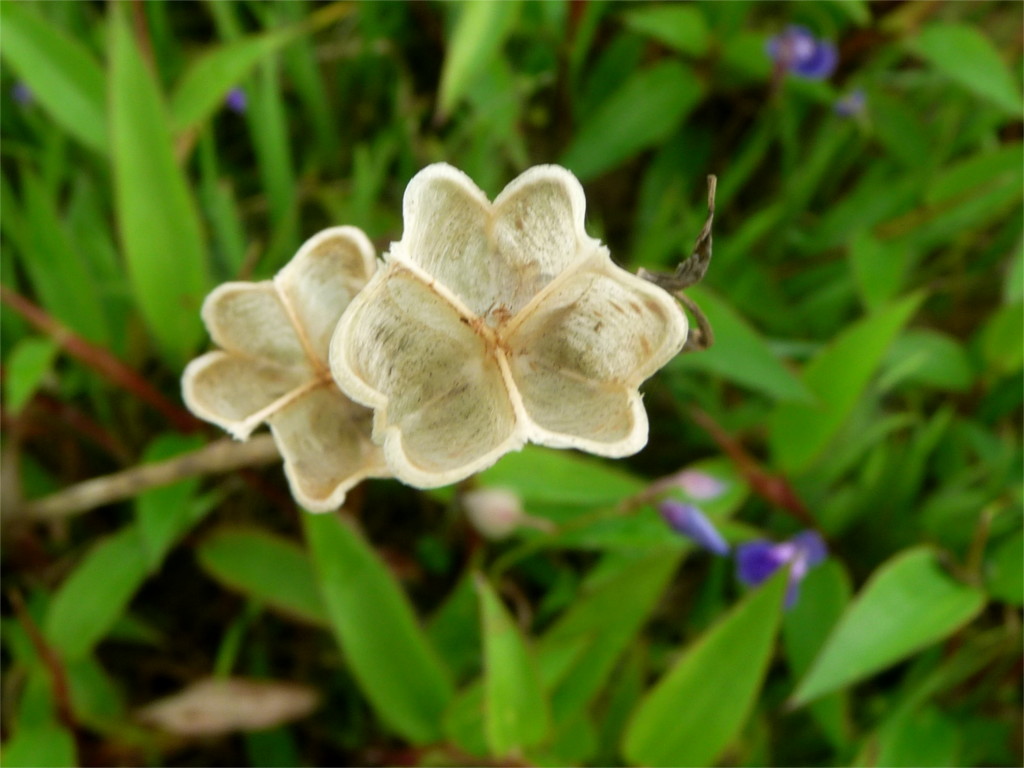 “What’s that flower?” The Family asked me as I was stalking a Ceropegia. I looked around at the pentagonal white shapes on a stalk that was about 20 centimeters high. “I don’t know”, I said, as I took a photo for later reference. She soon found that it was not a flower. A flower has sexual organs, and this did not have any. Mandar explained that it was the opened fruit of the Dipcadi montanum. I’d posted about this plant from the Hyacinth family last year after a single sighting.

This year I’d seen it several times. In fact just a few minutes before I’d seen another stalk which had started fruiting. You can see the fruit towards of the bottom of the stalk in the photo here: a dark green knob. The chance sighting I had last year was of the D. montanum plant standing in a field of bladderwort (Utricularia). Each sighting this year showed the same thing. In fact, the purple spots which you see in the featured photo are purple bladderwort. The linkage between the two just got stronger in my mind because of this statistical improvement. Typically the bladderwort grows in poor soil, and gets nourishment from digesting small insects. There is evidence of a rich ecosystem which grows inside the bladder. Does this ecosystem produce benefits to the thin soil around it which are reaped by the bulbs of the Dipcadi? I don’t see anything written about it. 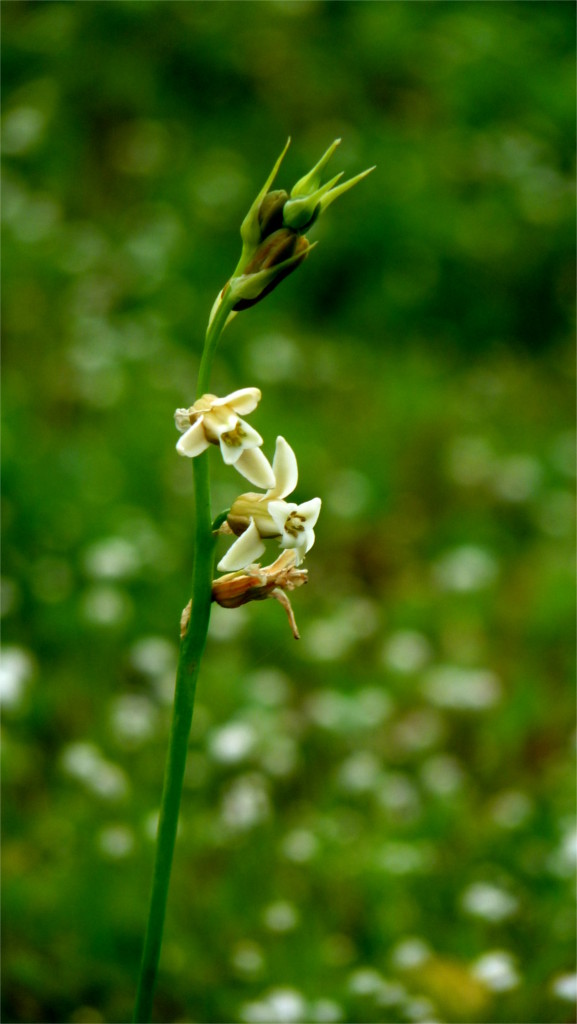 I got a sharp photo (above) of a flowering Dipcadi on the nearby lateritic plateau of Chilkewadi. The spots of white that you see in the photo are of globular pipewort (Eriocaulon sedgewickii). These are known to grow in association with bladderwort. In fact the field had some, although they do not appear in the photo. The triple association of Dipcadi, bladderwort and pipewort is very strong, and cries out for an explanation. 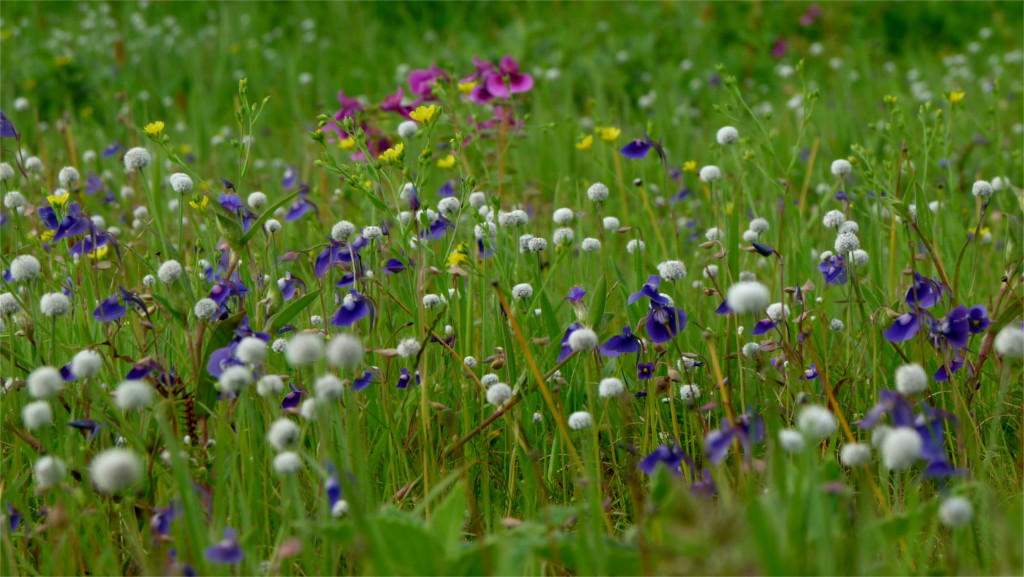 I’ve written about the world heritage Kaas plateau before. I went back there over the weekend. The volcanic rock barely holds any soil, and what little is there has little nutrient. The plants that one can see here have evolved in this hard environment. As a result, this 10 square kilometer area at an altitude of about 1.2 kilometers is an island mountain: the flora here is isolated from flora in other plateaus in the region. There’s a brief but glorious flowering at the end of the monsoon. By all accounts the flowers change almost every week. 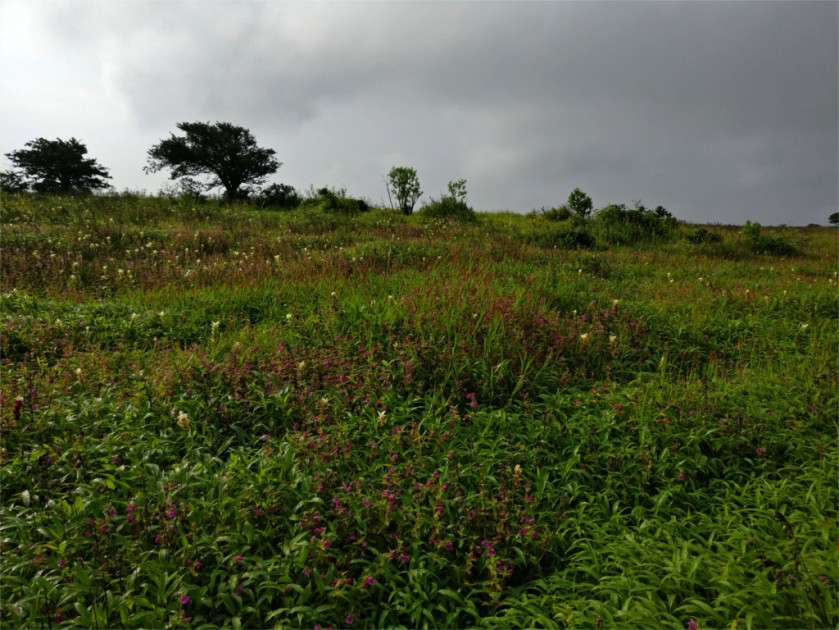 The most famous plant here is the Topli Karvi (Strobilanthes sessilis) which blooms in mass once every seven years. Last year this was in bloom. This year the general view (see photo above) did not show any of the bright blue flowers of this bush. One had to search hard for the few isolated and idiosyncratic bushes of S. sessilis which flowered this year. Instead the landscape was full of patches of white globular pipewort (Eriocaulon sedgewickii) mixed in with the vivid colours of the carnivorous purple bladderwort (Utricularia purpurascens). In other places we patches of the yellow sonkadi (Pentanema indicum) mixed in with the violet rosemary balsam (Impatients oppositifolia). You can see all four species in the featured photo.

This week the balsam outnumbered everything. Most green patches had highlights of violet. Maybe by next week the sonkadi will dominate. 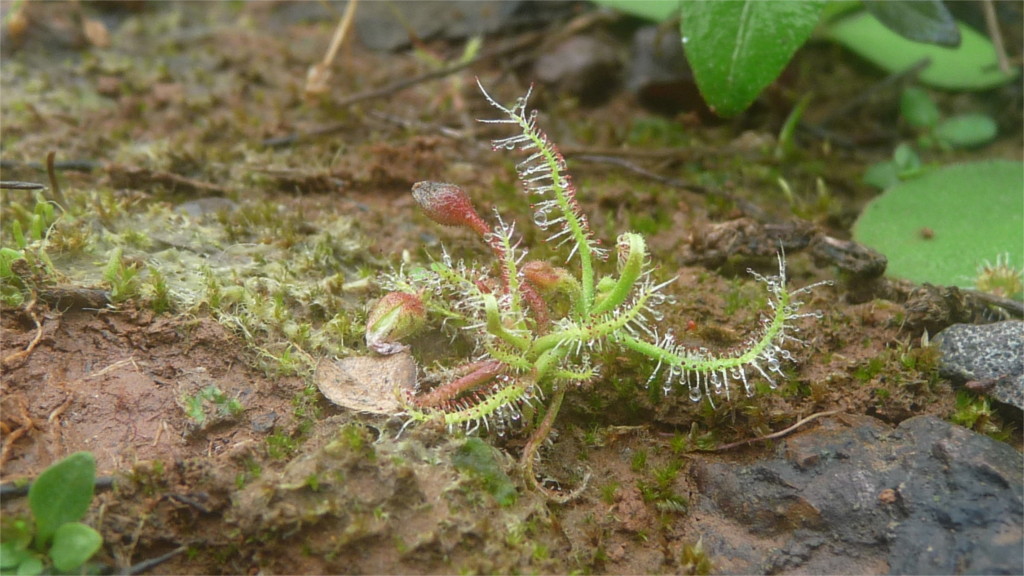 When I listen to fellow tourists during trips to jungles, it is clear that the stars are the carnivores: tigers, leopards, even wild dogs. In fact I often meet people who do not enjoy the strangeness of tropical jungles, and consider a trip wasted unless they see a tiger close up. So it is also during a visit to the kilometer-high plateau of Kaas: the carnivorous plants of this inselberg enjoy stardom, but are seldom seen or recognized. These stars are the sundew (featured photo) and the small purple flowers of the bladderwort (below right).

The bladderworts, such as the Utriculata purpurea whose purple flowers you see in the photo alongside, are the tiger of this jungle. These bladderworts are rootless plants that float on patches of water. I saw them in growing in close conjunction with other small herbs. 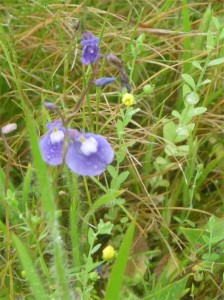 Since I was a tourist and not a biologist, I did not try to separate them out to check whether they are free floating. The close association with other plants makes it likely that they float on a mat of vegetation. A recent study found large communities of living algae and rotifers in the bladders of some individuals of this species growing in Florida. So it is possible that Seeta’s tears, as this species is called locally, derives a benefit from supporting an ecosystem within itself, rather than eating everything. To push the analogy further, U. purpurea, may not be the Kumbhakarna it is often thought to be, waking from sleep during the monsoon to eat everything that lands in the bladder. By supporting communities of living creatures, it may be closer in function to Seeta’s mother: the earth itself.

At the moment I care more about Drosera than the origin of all the species in the world. [Charles Darwin, 1860, in a letter to Charles Lyell]

Carnivorous plants are usually found in wet and nutrient poor soils. Like many of these plants, the sundew is poor at competing with neighbouring plants for light. We found three of them, probably Drosera Indica, in patches of ground below the roots of Topli Karvi bushes. I often wondered about whether the sundew is beneficial to humans or not, and was pleased to see a positive answer. Apparently Drosera preferentially eat mosquitoes, midges, and biting flies, which would otherwise proliferate in these wetlands, and therefore pose public health hazards. 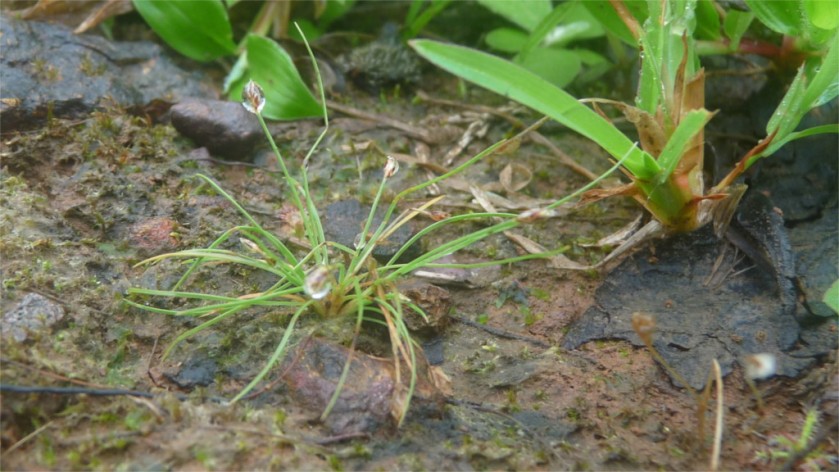 While watching tigers you may also watch birds. While trying to take the featured photo of the sundew, I thought I saw a little tuft of grass growing next to it. When I looked at it again I thought that maybe it was not grass but a lily. I took a photo, and later saw that I was mistaken again. The tiny flowers at the tips of some of the stalks were clearly protected by a single modified leaf. This is called a spathe. Its presence means that the plant belongs to the family Araceae and so is cousin to Irises and Crocuses. I wish I’d looked more carefully at it in the field and tried to take a closer photo of the unfurled spathe and the inflorescence which it protects. Not having made this observation, I have no identification. Please help, if you can.

Just in case you like to read about plants, I will leave you to settle down to read this interesting scientific review of the state of our knowledge of carnivorous plants.