The Family is a great forager. My shopping trips start with a list, and, sometimes, when some of the things on the list are not available, I replace them with the nearest equivalent. The contents of the bag do not surprise anyone. When The Family leaves home, I have no idea what she will get back. The trip that she took to work also yielded some surprises. A few landed up on our table instantly. The samosas and the hot vadas (without pav, unfortunately) were what I liked best. She put it on the last remaining piece of the first table setting we’d bought together. The usual rule of ceramics seems to be holding up: a chipped plate never breaks. 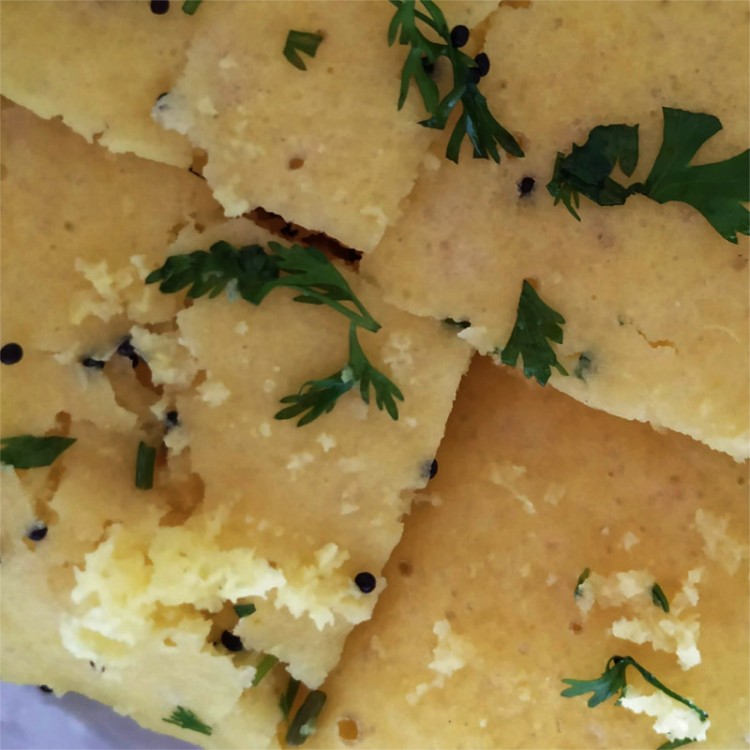 The fluffy hot dhoklas were another surprise. She’d also managed a peek into the kitchen where they had been prepared. As we demolished a large part of her findings, I listened to her stories of foot operated hand sanitizer dispensers, thin crowds in favourite shops, and clean kitchens. The first wave of infections is not over in Mumbai yet. As long as people remain masked, and spend most of their time distancing from each other, there should be no disastrous second wave.

Lonavala is full of shops which say “Maganlal Chikki” in large friendly letters, usually gold on red. The Family never fails to tell me that these shops are fake and the original Maganlal’s can be found in the market just outside the Lonavala railway station. In fact, it is on the main road, and not hard to find. (The sadhu in front of the shop is not a fixture).

I normally wouldn’t name a brand, but the fact of the matter is that the generic chikki no longer exists in Lonavala. A decade ago you could find several brand names. But the name Maganlal drove out almost everything else. The Family believes that all the other shops make their own chikki and sell it under the name Maganlal, and nothing can be done about it because the name was never protected. I’m not a connoisseur of chikki; they all taste nice but indistinguishable to me. My theory is that Maganlal has a large factory which make chikki in bulk and supplies it to all the other vendors. Every old hand from Mumbai says that there is one shop which is better than all the others. When you ask, each one names a different shop. It just reinforces my belief that all chikki is the same.

Instead of being involved in these wars of faith, I’ve found the complete cultural antithesis: walnut fudge. There is exactly one shop in Lonavala which makes and sells fudge, and that is Cooper’s. It also stands next to the railway station, and is hard to miss. When I discovered Cooper’s it was presided over by a cantankerous Parsi gentleman who would dispense the fudge with utter randomness. I’ve never managed to get more than 100 grams of fudge from him. The Family has occasionally been handed a quarter kilo packet. He would open at 11 in the morning and close as soon as the small batch of fudge he’d made got over. I was relieved to see that he has been replaced at the counter by his daughter. But she put me in my place, literally. The counter was surrounded by customers. I waited until one left, and quickly slid into his place. The lady gave me a withering look and said “You will have to wait your turn, you know. Just because there is no queue does not mean that I have lost track of who came first.” She did give me a kilo of walnut fudge, though.

The one lovely bit of food which remains gloriously unbranded is the ghat special: vada pav. The lovely sour-dough roll called the pav goes wonderfully with hot batter-fried potato vada. You always get a generous helping of a dry garlic chutney with the combination in the hills. Its just the thing to keep you going on a long walk.