The six of us struck off eastwards across Bhutan with no particular destination in mind. We had a vague idea that we would stay one night each in a valley. Phobjika valley was the first we came to. We made a turn off the forested east-west road, and drove for a little more than an hour until the forest opened up very suddenly. In front of us was a wide valley carpeted in green (featured photo). We took a second look, because the carpet of greenery was not grass. It was a stiff ankle-high plant, which was very hard to push through. We decided not to climb the first hills we saw, but to go on ahead.

In 2008 Bhutan was still in its last year as an absolute monarchy. You could not book hotels outside the Thimphu-Punakha-Paro triangle on the web. We knew that some tourists came to Phobjika, so we were pretty certain that we would find a few rooms. We drove along the road, and soon came to a little village.

There was a family-run hotel, and they had rooms.

People in Bhutan are extremely friendly and informal. We gathered in a little dining room with the family. A baby was handed to us, and as we kept him entertained the table filled up with snacks. There was a mixture of dishes made with local produce, and simple packaged things like biscuits and tea. The long transport lines needed to bring them here made them extremely expensive. Dinner included a wonderful thukpa made with vegetables freshly plucked from the garden.

Layers of blankets and a wood-burning radiator in the middle of the room kept us warm through the night. Phobjika lies between 2900 and 3200 meters in altitude, but in the middle of May temperatures could dip down to 4 Celsius at night. In winter there is enough snow that some villagers move away to more comfortable valleys.

The next morning after breakfast The Family and the rest went off bird watching. I decided to take a walk down the valley. Bhutan is built from material laid down half a billion years ago near the Tethys Sea, and carried here by the Indian continental plate. The geological events that made Bhutan occurred mainly in the last 20 million years, and have been mapped extensively by the Geological Surveys of Bhutan and India. As the Indian plate pushes up the Tibetan plate, the sheets of ancient rock concertinaed and folded vertically along the east-west axis we were traversing.

As a result the Tethys rocks metamorphosed into the minerals seen here today.

The gently sloping Phobjika valley lies over white granite rocks distinct from the geology of Paro to the west and Bumthang to the east. Glaciation in the last few thousand years may have initially started the valley. However, its present form is due to the action of monsoon, repeated frosts and snowfall, and the wind that constantly blows across the valley, carrying topsoil with it. Interestingly, there is evidence of pre-historic human slash-and-burn agriculture in the last two thousand years in the form of deeply buried charcoal. This ancient abuse is perhaps what cleared the valley of the forest cover which lies around it, and caused the soil to turn unproductive. I wonder whether the two rivers which wind through the valley today, the Nake Chu and the Gay Chu, flowed in those days.

I walked along an unpaved road with the valley sloping away to my left. The weather was mild enough, even with the breeze that brought clouds tumbling over the far hills. Along ridges I could see rows of flags: white for mourning and coloured for prayers. 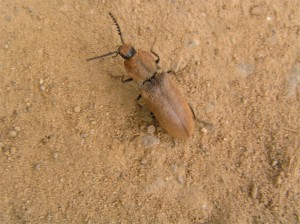 The Buddhist belief here is that the winds blow these prayers and distribute them over the valley.

The poor soil needs prayers. As I walked along, I noticed the rocky ground with a thin covering of red dust. Hardy wild plants straggled across it, and strange insects scuttled between patches of growth. Ferns grew out of the soil, hiding spiders in their spiral folds. In the distance I saw farmers at work. Once I passed a cow which turned to follow me with her eyes without interrupting her mouth. 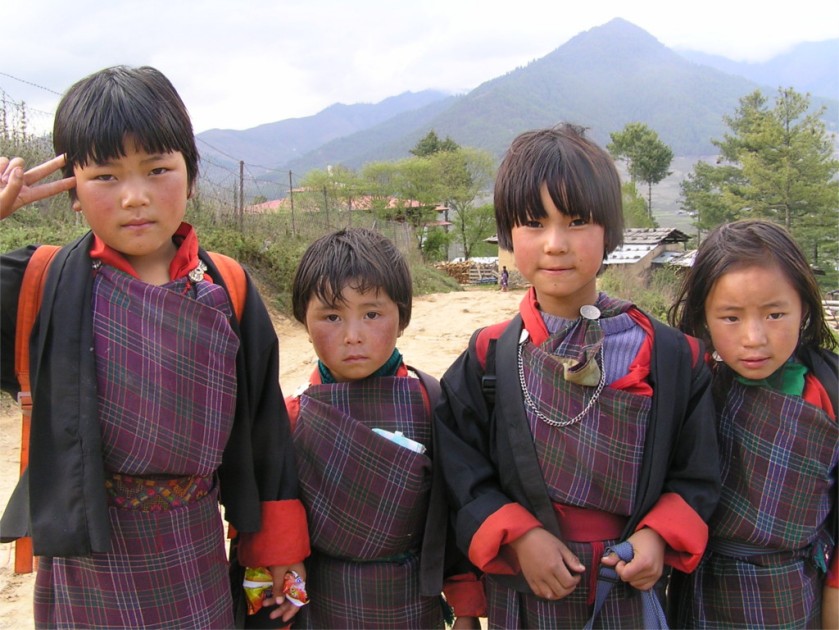 A truck drove by and the friendly young driver leaned out to smile and wave. A young child scuttled away from me and then gathered enough courage to peer at me from around his door. The mother came out to investigate, and gave me a friendly wave. After a while I saw school children walking back home. This gang of four planted themselves in front of me and told me in their broken English to take a photo. They stood grim-faced for the photo, but immediately after that broke into smiles and started pushing each other. It was time for me to get back for lunch and find out which birds The Family had spotted.