At one end of Wuhan’s Han Street entertainment area is the Han Show Theatre. Modeled after Chinese red lanterns, the architects Steven Chilton and Marc Fisher (who was the director of the opening ceremonies of the Beijing Olympics) created a theatre that made it difficult not to have my jaw drop. What looks at first sight like a grandiose stage swings away to create a deep swimming pool. The front seats draw back from the pool area. Behind the immense stage three screens descend to form a backdrop on which videos play.

I got to see the Han Show, crafted by the Belgian theatre director Franco Dragone. While watching the spectacular acrobatics and aquatics show I thought to myself that this was the Cirque du Soleil on a really grand Chinese scale. I was happy to find later that I was not mistaken; Dragone was one of the creators of the Cirque du Soleil. Given a 2.5 billion RMB investment from the Wanda group, the architects and directors created a ninety minute show that leaves you with a great big smile on your face.

At a late point in the show I realized that I did not have to take stills. So here is a video of a part of the show that was fun. Not as impressive as the forty meter high dive (one of the photos in the slide show above), but great fun.

Some of the most scenic parts of Wuhan lie around its East Lake. From this, a little canal called Chu River runs westwards. On one bank a shopping and entertainment street was inaugurated in 2011, to commemorate the centenary of the Wuchang Revolution which led to the founding of the Chinese republic. I found it interesting that the Wanda Group, one of the Fortune 500 companies headquartered in China, invested 50 billion RMB in this development. At one end of the street you see the Wanda Plaza, the colourful blob of light which you see on the left of the featured photo.

In the next few days I would spend a bit of my little leisure hours in this entertainment street, but today, after an early sea food dinner, I decided to cross the canal and walk down the dark, but pleasant, walking path on the other side. This turned out to be a brilliant place from which to view the street.

As the Chinese middle class expanded, the opportunities for entertainment groups increased rapidly. A street full of shops, restaurants, and bars looks glitzy and modern, and you may take it to be a fake China, but it is not. It is just the 21st century avatar of the Chinatown shopping streets which accounts of foreigners from the late Qing period describe repeatedly. 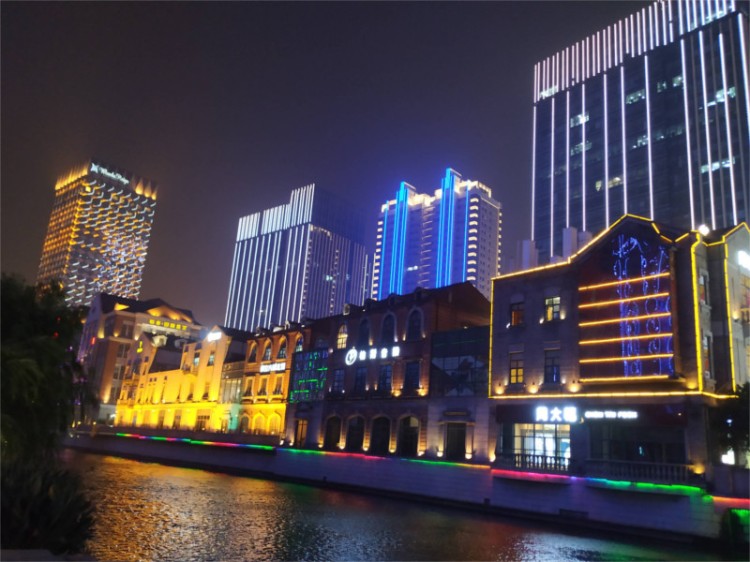 The newly built shop floors housed in low-rise blocks which look like 19th century warehouses, churches, and other Western-influenced building styles, should be taken light-heartedly. They are a fairy tale theme park where you come in the evenings to listen to a crooner belt out songs in English about diamonds for your baby next to expensive jewellery shops. The tall building at the extreme left of the photo above is an enormous hotel called the Wanda Reign, which stands at the other end of Han street. 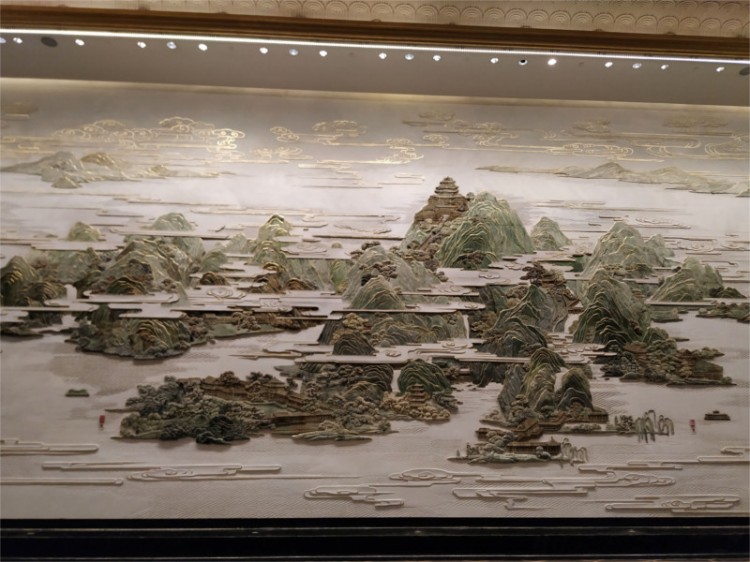 The lobby is a grand place, as you can see from the photos above and below. The huge mural on the wall is made of jade. I wonder what fraction of the 50 billion RMB went into making this. I looked around at the gigantic sofas which are thoroughly dwarfed by this grand mural, and found one which I could shrink in to.

This China can be intimidating if you take it too seriously. But the way I deal with it is to think of it as a Disneyland. I don’t think I’m wrong to treat it like this. Walk out on to a street just after dark and look up at the gigantic buildings around you. You can count the lighted windows on the fingers of one hand. Many things in China are fairy tales, except the one piece of magic that really matters. A number of people about equal to the population of the USA was raised out of poverty and into the middle class in one generation.