What passed for winter, the season called shishir, is nearly over. The sea remains cool, but the days are longer. The sun gets enough time to warm up the sea breeze. Still, the light is mild, and oranges are in season. In the afternoons, when the sun streams into the room I work in, I can sit and enjoy an orange with my tea (in shades of Leonard Cohen!) and then take a photo of the emptiness and harmony.

Again I was distracted and opened up my copy of Achaya’s book on Indian food. Oranges were first mentioned by Charaka, who lived in the 2nd century BCE. He called it nagaranga. The traveller Xuan Zang, in his memoirs of his travel through India in mid-7th century CE, mentions them as growing everywhere, but does not use the Chinese word for the fruit. In Shah Jahan’s time (17th century CE) grafting was applied to oranges and mangos in Bengal. Presumably it was already widely available when the Portuguese came to India. ArcGIS adds that the origin of this fruit is in the southeastern foothills of the Himalayas, but misses the reference in Charaka. 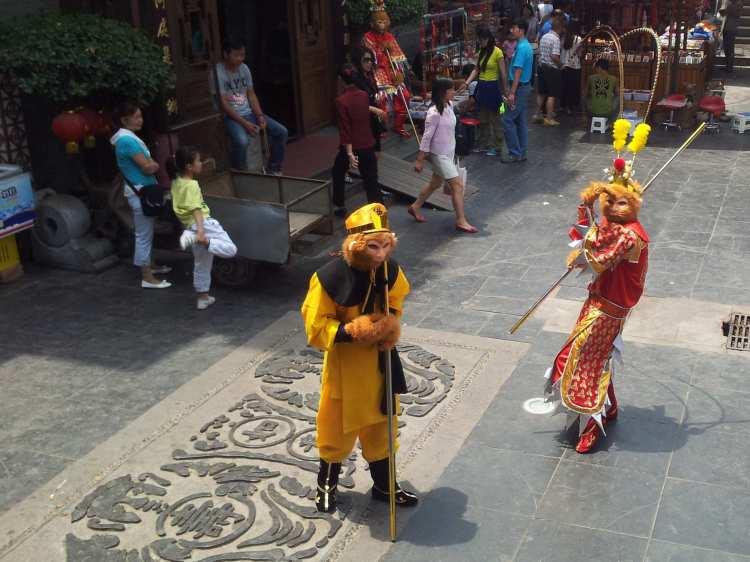 A Ming dynasty novel written about the travel of the monk Xuanzang to China is called "Journey to the West". I understand that it introduces some mythical travelling companions for the monk, one of whom is the popular monkey king. His role was to help the monk to cross borders. The monkey king seems to be a popular character for street-side entertainers. We saw the first one when we visited Hangzhou. In Xi’an they are even more common. This pair was vying for audience with two more pairs near the Big Wild Goose Pagoda, the place where Xuanzang lived after returning from India.

Vying may be too strong a word. There was a crowd around each. The monkey king seems to be a really popular character. I’m sure there is some difference between the two characters in the photo which I have not appreciated. Can anyone let me know?

An old imperial capital holds many stories. One of the famous stories of Chang’an (today’s Xi’an) is the journey of the monk Xuanzang to India (he is known in India as Huen Tsang). He made this journey in the middle of the 7th century, during China’s T’ang dynasty, and the reign of Harshavardhana in India. His journey followed the silk route west and then turned south entering India through Afghanistan, and eventually took him to Patna and Nalanda. A good account of the journey is given in Wikipedia. He learnt under the master Silabhadra in Nalanda and returned to China with manuscripts which were translated by a team of monks in the Big Wild Goose Pagoda (Dayan Ta) of Xi’an.

The pagoda is surrounded by a garden which was full of families with children on the Sunday when we visited. As at all Chinese tourist draws, there were many tourists and large but fast-moving queues for the expensive tickets. Inside, there was the usual temple, busy with young people praying hard to pass their exams. You need to pay separately to climb the seven story pagoda. But the real heart of this place is the museum for Xuanzang. There are three halls, with depictions of his journeys. The journey was not without trouble: he was captured by bandits more than once, as shown in the carved wooden panels (photo above). He wrote about his journeys in a book called the “Great T’ang Records on the Western Regions”. Almost a thousand years later a novel, “Journey to the West”, was written about his journeys, which is probably the source of most people’s knowledge about the monk.

The translation of the buddhist texts Xuanzang brought back to China was a major cultural milestone. In Chinese culture it gave rise to new techniques of translation and accurate scholarship. Its influence on the world’s culture was also remarkable, since it provided texts which were the basis of Buddhism’s further spread eastwards. Later when some of the original Pali texts were lost in India, these translations provided a basis for their reconstruction. The walls of the museum inside the Pagoda grounds also depict this long scholarly work. Interestingly, the scholars are portrayed working at tables piled with fruits (see photo above), which perhaps indicates the support that the T’ang emperor gave to this enterprise.

The story of the monk’s journey to India was an important chapter in school textbooks in India, although it had faded a little in my memory. It is interesting to see that the story is even more well-known in China.