One of my targets for the first day’s walk in Nanjing was the Zhonghua gate. When the Hongwu emperor founded the Ming dynasty and made Nanjing the capital of his kingdom in the second half of the 14th century, he decided he needed to defend it well. The southern and western parts of the city were already defended by a wall built during the Tang period (between the 7th and 10th centuries). The Ming emperor added new sections to the east and north and completely walled in the city, and also added fortifications to the Zhonghua gate in the south.

I marveled at the thickness of the three concentric layers of walls. They have guard posts built into them. Some of these rooms now house art installations and exhibitions. Others are just locked up. I gawked at the barbicans, and the grooves through which thick wooden gates could be lowered in a hurry if enemies were spotted. I could sprain my back taking a photo (above) of the 20 meter high wall at the southern end while standing in front of the gate. 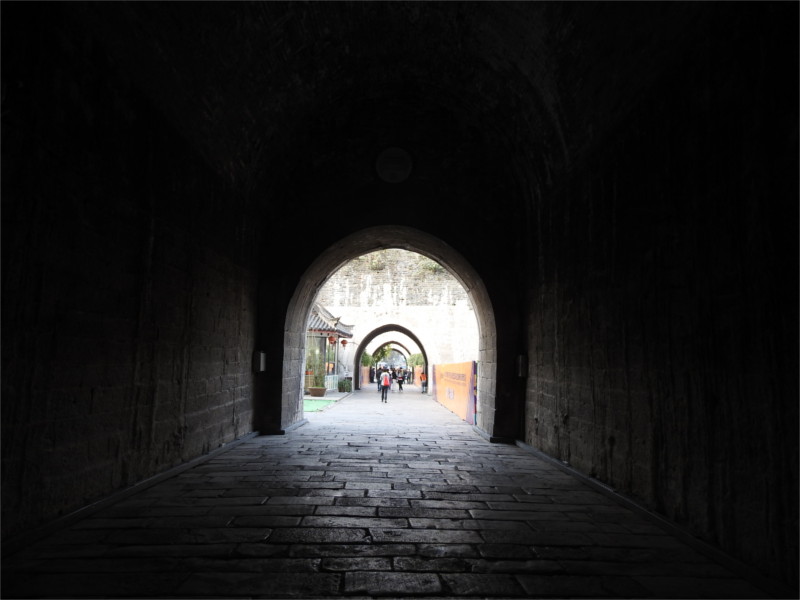 It was much easier to stand just inside the outermost gate, and take a shot along the entrance (looking north, photo above) of the four concentric gateways. I happened to be there the day before the Nanjing city marathon. When I looked at the news a couple of days later I found that over 55 thousand people had registered for the 30 thousand spots available. It was open to anyone from any country who had a valid ID. The runners squeezed through this passage in the walls at one point in the race.

Steps led up the walls. As I climbed them I realized how easy they were on the knees. I wondered how old the steps were, could they be original? The steps up the Great Wall near Beijing, in Badaling, had been high and uneven, putting a lot of strain on the knees. Here, the slope and the height of the steps was such that I’m sure that even a reasonably mobile 70 year old person would be able to negotiate it. 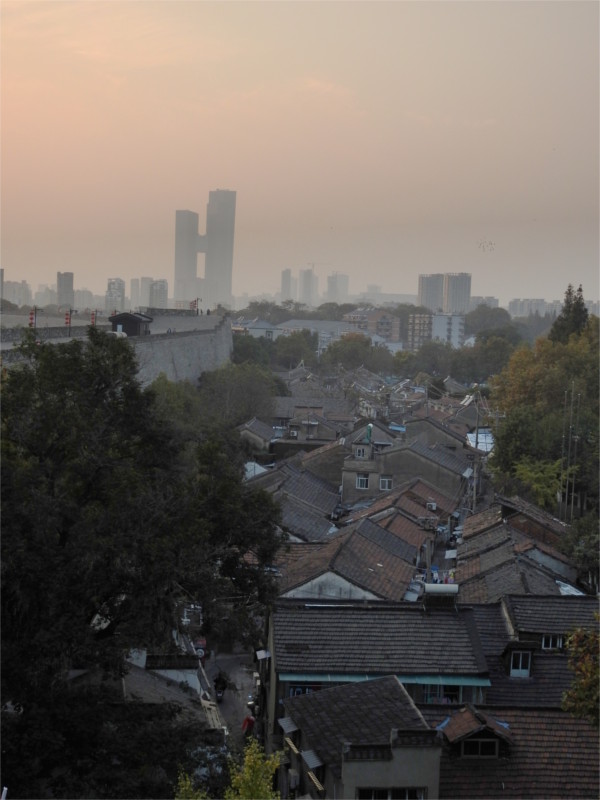 I looked back towards the center of town from the top of the wall. The high rises occupied a large part of the city center, but the skyline did not sport the fancy shapes that you see in Beijing, Shanghai, or even Guangzhou. Closer to the wall was a thicket of charming old houses. These were roofed with red fired-clay tiles, and were not in good repair. At one end of a dense mass of them, some had been torn down, and a crane towered over the open land. I guess they will be replaced by newer buildings in a year or two.

Straight down the line of the gate was the busy Zhonghua Road. I stared at it for a while. Buses came down it at a slow pace, while cars sped around them whenever they could. At a large pedestrian island marked by zebra stripes, a lady had stopped her electric bike. These vehicles run along pedestrian pathways. They are battery powered, and therefore quite silent. I find that I’m often startled by one of them whizzing past me. This looked like a nice photo to take. 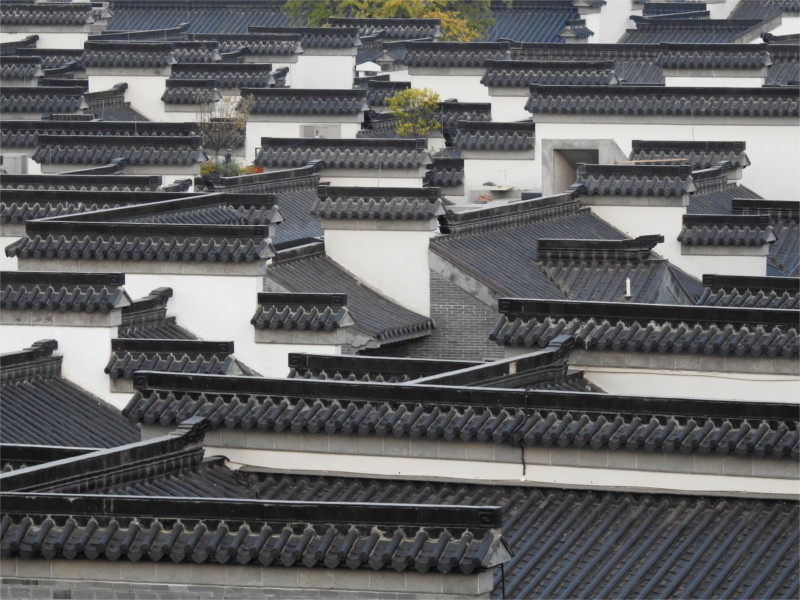 The other side of the Zhonghua Road had much fancier low buildings: white walls with black clay roofs and accents. Is this what is replacing the old neighbourhoods, I wondered. Later as I walked through the lanes between these buildings towards the Confucius Temple, I realized that many of them housed fancy shops and restaurants. So perhaps this is the shape of things to come. Unfortunate that the charming old tiled houses are being replaced entirely by these, but it is better than having high rise towers cheek by jowl with the 600 year old walls.

The huge area on top of the walls was full of people. It looked like you could take golf carts around the walls, or even bike along it if you wanted. People were doing both these things. Others strolled, or sat in groups and chatted. And, of course, some were having their wedding photos taken. I was happy to take the opportunity to do a little ambush photography on a Ming-era wall.