In Spain we tried to stray off the beaten path whenever we could. This meant that we would often get lost and tired. The hot sun would force us into a small and forgotten bar now and then. These places are either wonderful or terribly dispiriting. The featured photo shows two barflies nursing their drinks in the middle of a hot afternoon. It would seem we had wandered into a bar of lost souls. 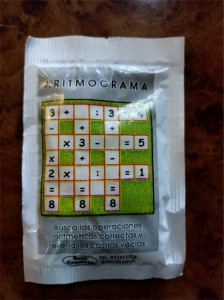 The sachets of sugar we got with our coffee had these two puzzles on them. Presumably the old people we saw were trying to solve bigger versions of these puzzles.

I shoulder-surfed one of them as we left. He was solving an intricate word puzzle which was not a crossword. Maybe we could try to buy one of these books and try our hands at them.