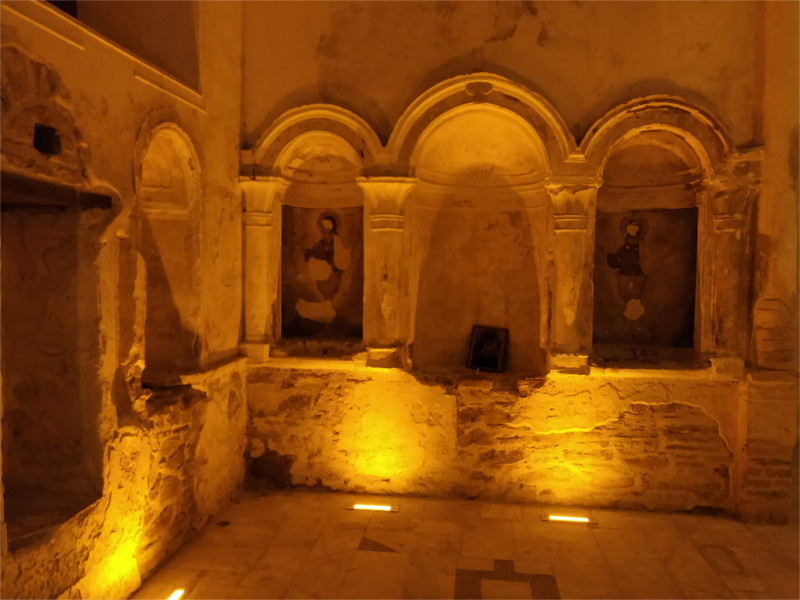 More or less at the highest level of the village of Şirince, not far from Selçuk, is the old Orthodox church named after St. John the Baptist. Entrance to it is through a courtyard which contains a bunch of shops, a restaurant, and an interesting wishing well, under a statue of Theotokos Miriam, to give the Virgin Mary her proper Orthodox name. The bottom of the fountain is lined with coins tossed in by those who need a little luck in their lives. 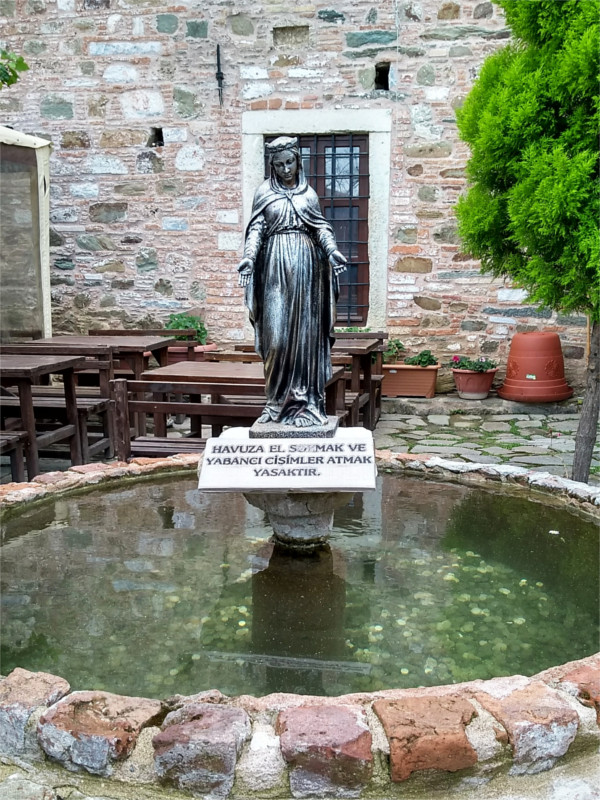 I don’t know how Lonely Planet found that the church was completed in 1805, because I didn’t notice a plaque. However, it is true that the church is being restored. The door was open, and we could walk right into the dim interior lit by halogen lamps. I guess smaller Orthodox churches usually have the same floor plan as this: a central dome with the main altar on one side, with secondary niches on other sides of the rectangular room.

The dome was made of brick, as we could easily verify since the plaster work here has not been completed. The simple design in the interior of the dome was also incompletely restored. There are vaulted roofs on all sides of the dome, and one end held some frescoes. I wished that the lighting inside had been neutral, because it is hard to judge colours when a painting is illuminated by halogen lamps. 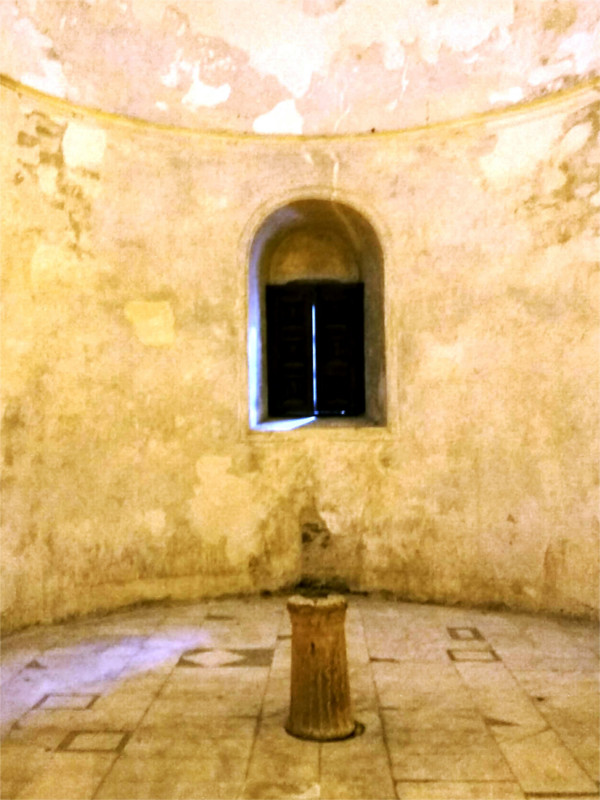 Otherwise the church was bare. This simplicity actually made it look good. This niche for example, with a window which is not shut tight, was a beautifully serene space. I wonder what was placed on top of the pedestal. A baptismal font? The restoration of the church is being paid for by the Governor of Izmir province, under the assumption that this is improve tourism. I was happy to spend myu few minutes inside, adding to the statistics.

There is a road that runs on the ridge on top of the village from this church northwards. As we followed this picturesque route, a strong breeze made me zip up my jacket. The clouds were being blown away by this breeze, so when we reached St. Demetrios Church at the other end of the road the sun was out again. A battered but sturdy door stood open in front of the church, inviting us into this mid-19th century church. All that I could gather about it was that it was built after St. John’s, and that it had been used as a mosque for some years after the population exchange which came at the collapse of the Ottoman empire in 1923. 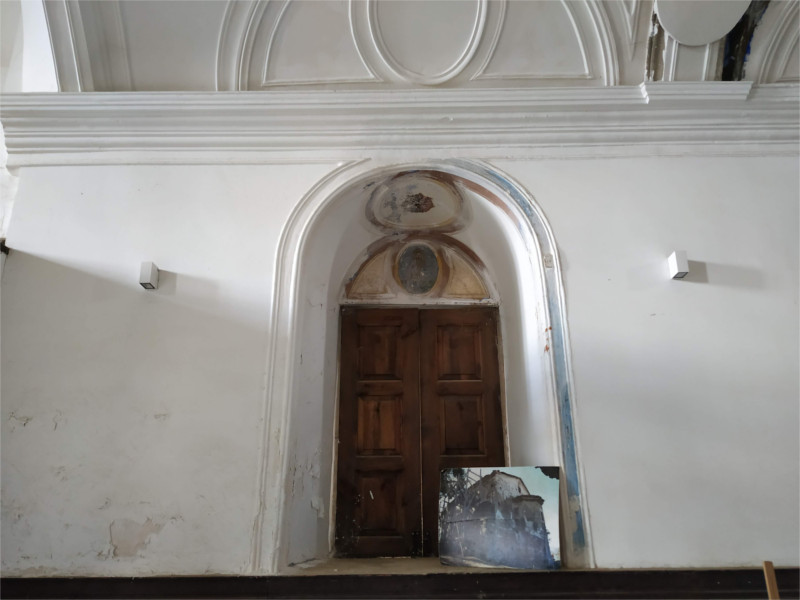 Cars parked in front of the church (I wondered how they had got up here) had prevented me from walking back to take a photo of the church. So it was fortunate that inside, propped up on a window ledge was a large fading print of a photo of the exterior at a time when the roof had caved in. At least that basic structural repairs had been completed. The sunlight seeping in from the windows and the open door in the western wall lit up the bright white interior of the church.

The sunlight was just right to give us a grand view of the incredible sight of the iconostasis, the wooden framework which formed a wall of icons which you can see in the photo above. The wood requires repair, and I wonder whether the gaps where icons once stood can be filled again. The marble floor was in very bad repair. This could very well be the showpiece of the village if only it could be restored. I looked up at the frescoes and painted plasterwork that remains in one part of the celiing. “This could become a grand structure again,” The Family said, and I agreed. 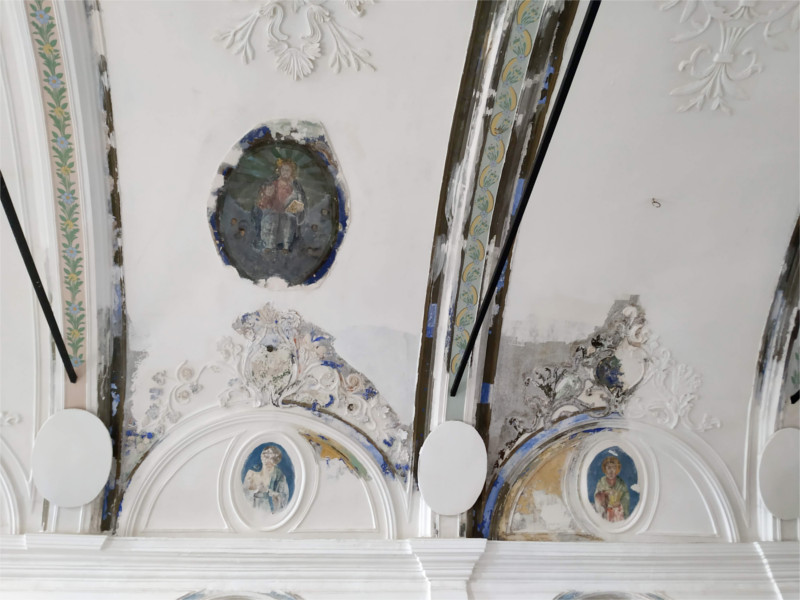 Demetrios was Greek by birth, died in the early 4th century, and was beatified soon after. In medieval times he came to be associated with the same function that Demeter performed in ancient Greece: farming and cattle. Until the population exchange, this church was the starting point of an annual pilgrimage, on August 15, up to the so-called house of Mary in Selçuk. The drive would be less than half an hour today, but on foot this could take several hours. There was a cafe right next to the church, but I wanted to move down into the shelter of the village, and out of the breeze.

2 thoughts on “Two churches in Şirince”