I’d expected to be charmed by Kochi, and I was afraid that I wouldn’t be. The fishing nets (featured photo) have been iconic tourist photographs for over half a century. A couple of decades back they began to be called Chinese fishing nets. Kochi’s brush with China came with the seven voyages of the Chinese Ming-dynasty admiral Zheng He. Did he bring the technology here? I couldn’t find any mention of these shore fixed nets which can dip into the water and back up as a fisherman walks along a suspension mast from any other part of the world. On the other hand, India excels at preserving ancient customs from the rest of the world. It will take a dedicated historian to find the full story of the nets. What I could see is that they are now only preserved as tourist attractions. The real fishing has moved off-shore as the coastal waters die. Two of our planned trips to Kochi had been cancelled before, once because of a strike, the other because of a flood. The third time everything worked. 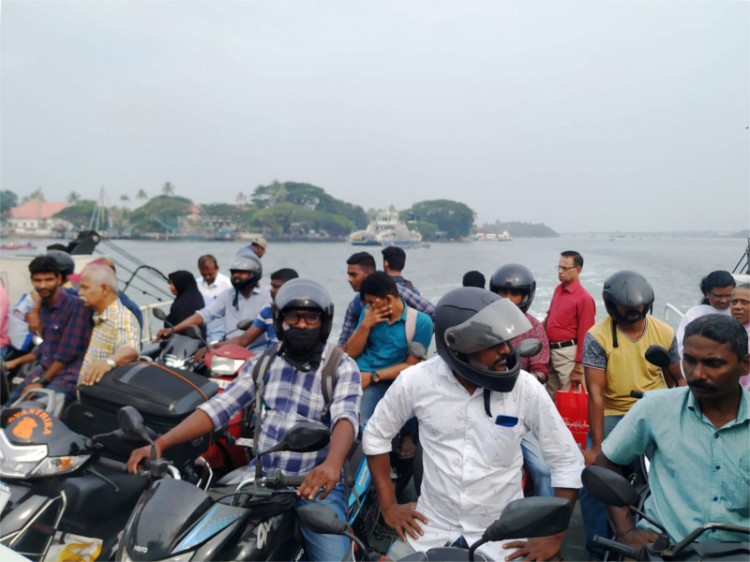 We’d taken an early morning flight out of Mumbai, which involved getting up well before sunrise. Kochi’s airport is more than an hour outside the city. I nodded off in the prepaid taxi to our hotel, and woke as the driver was telling The Family that this being rush hour he would like to avoid passing through the center of Ernakulam. Good enough reason to veer north and take a ferry from Vypin to the tip of Fort Kochi. The ferry was crowded with office-goers on their motorbikes. The lanes of Kochi are so narrow that bicycles and scooters make more sense than the car we were in, as we would soon find.

The crossing was quick and the landing was smooth. We got out of the ferry stage quickly and lost ourselves in the little lanes of Fort Kochi. This was exactly what I’d expected: narrow roads, laid out in medieval times. But what I had not expected was the smell of spices everywhere, a reminder of the source of medieval wealth, and still a large component of the trade that passes through Kochi. I came back to the ferry stage a couple of days later and was surprised at how orderly it was. As soon as a ferry approaches the landing, people spontaneously clear the center of the road, and line up on the sides to board. There is no jostling; people and vehicles disembark first, boarding happens after this. The aggression and chaos of north India seem to be absent usually.

Driving on we passed interesting sights. The bright red facade of Los Angeles Cafe, with its white trim caught my eye. We spent a lot of time in Kochi’s cafes. The Family pointed out to me that one day we visited five cafes and two restaurants. “We can take it easy. We are on holiday,” was my wholly inadequate response. She wasn’t convinced, and the next day we exceeded this record by one. We never did enter Los Angeles cafe though. It was off on one side of the Spice bazaar, and although we passed that way more than once, it was always at an odd time.

The Spice bazaar was exactly what I’d expected it to be, only more so. Not only were there charming old buildings from which spice traders still operated, and large warehouses which were still in use, but there was also the smell of spices which filled the air. I could make out the warehouses which store cloves and cinnamon from those with dried ginger as I walked along the lanes here.

The one new turn that Kochi has taken is equally wonderful. In recent years it has been the home of India’s biggest art event, the Kochi-Muziris Biennale. This was an off-Biennale year, but the signs of change were everywhere. There was the wonderful art on streets which we chased down while we walked between cafes, one striking example of which you see in the photo above. Street art is ephemeral, we found commissioned work like this, older fading works which will be gone by next year, guerrilla art stenciled on to walls, signs pasted on, the whole range. Some warehouses have been turned into galleries, and the art scene is becoming edgier. At the same time there is a whole range of food: from the many wonderful traditional Kerala cuisines to innovative restaurants which build on these. Kochi is a place to go back to.