I’ve been keeping a close eye on walls near my flat in the last few months, ever since I realized that many kinds of moths on brightly lit walls at night, and can still be seen in the morning. The moths change from month to month. Perhaps part of this is just chance, but there seems to be some connection to the changing weather. As it got warmer, I’ve started seeing these green moths (featured photo) make an appearance. At rest it appears between 1 and 2 centimeters in size. I thought first that they are a widespread grass moth called Parotis marginata, but now examining the photo, I suppose it is not. P. marginata holds its deep green wings in the same triangular configuration when resting, but it has a brown margin to the wings, not white. I guess it belongs to the same superfamily (Pyraloidea) and I could just lump it into a species complex named after its commonest member Parotis marginata. 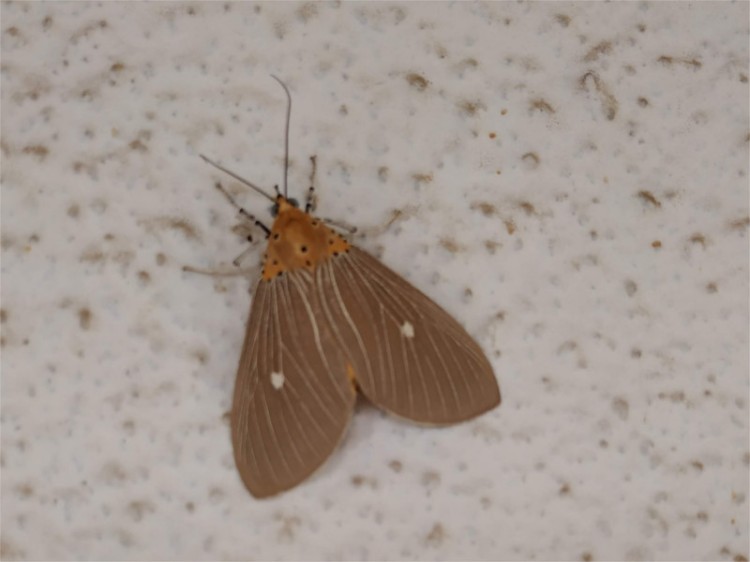 Another morning I spotted several of these Asota producta (superfamily Noctuoidea, no common name) sitting on the wall. They are among the largest moths I’ve seen in the last three months; at rest they are easily more than 2 centimeters long, and the wingspan is said to be as large as 6 cms in some specimens. It is widely reported across Sri Lanka, India and the Sundaland, which is Malaya peninsula and the islands around Borneo, Sumatra, and Java. Little more is known about it. We do not even know what it normally feeds on. I guess a strikingly coloured moth like this deserves a common name. Do you think that the spotted orange and brown is a name which is easily remembered?