One of the big tourist sights of Shanghai is the Ming-era (16th century) Yu garden. Looking through my photos I realize that I’ve been there in two seasons; once in late spring, 6 May 2015, and once in early winter, 2 November 2018. Did I find it worth visiting twice? In one sense this is a silly question, because gardens are always nice places to spend your time. But we were in Shanghai for only a day; so was it worth going into a garden which was still alive in my memory? 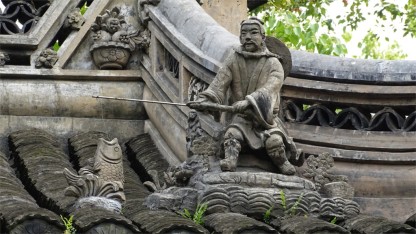 Take a look through my camera on my second day in China. Everything was new; the world vibrated with possibilities; my eyes were not used to China. The Yu garden is divided into six areas. In the third area we came across a beautiful stage called the Feng wu luan yin (literally Phoenix dance and song). My eyes snagged on the beautiful sculptures on the roof, which you can see in the gallery above. Rectangular windows with circular panels set into it also were new to me. I realized later in the trip that they symbolize the cosmos (tiandi); the rectangle is the earth (di) and the circle is heaven (tian). The almost symmetry of the lattice nagged at me. 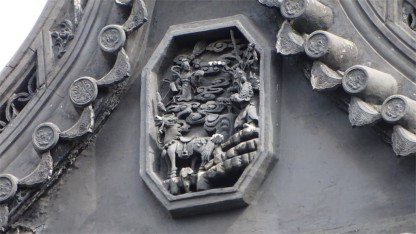 Although I could appreciate the artistry of the fired-clay sculptures, I certainly missed the layer of literature and somgs which have gathered around the garden, which many tourists will know. The second view was different, not only because a garden is different every time you pass through it, but also because I’d grown a little more used to China. I found it interesting that this garden was being built at roughly the same time as the Mughal gardens in parts of India. The contrast in styles is immense.

Between the two visits, a chance look at a review of a book called The Classical Gardens of Shanghai by Shelly Bryant, made me decide to read it. This put the garden in a broader historical perspective for me. Standing again at the same spot, did I see different things? You decide.

10 thoughts on “The garden of peace and comfort”