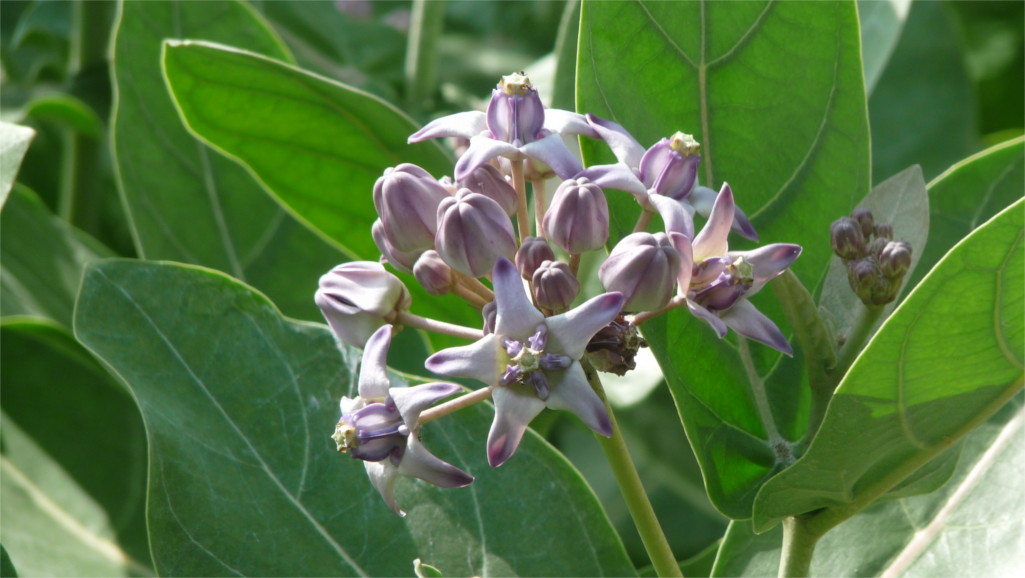 You can see milkweed (genus Calotropis), called aak in Hindi, in most parts of India. There are supposed to be three species which grow in India: the giant milkweed or crown flower (Calotropis gigantea) which you see in the featured photo, the milkweed (Calotropis procera) which you see in the photo below, and a species called Calotropis acia which I’m not sure that I have seen. I recognize the giant milkweed flower by its well separated and pointed petals and the fact that it is odourless. The milky sap which oozes from broken stems of aak is poisonous when ingested. That poison is used by several butterfly species, notably the one called Common Tiger (Danaus genutia). Its caterpillar gorges on these leaves, and incorporates the poison into its body. As a result, the caterpillar, and the adult which emerges from it, become poisonous. I’ve also seen ants swarming over milkweed, and wondered whether they use the chemicals in some way. 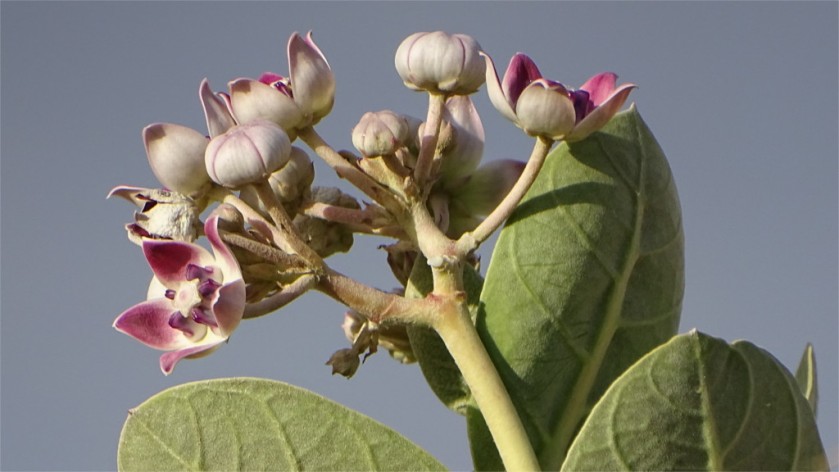 The flowers of C. procera also have the fivefold symmetry, but the petals are not as long and well-separated as that of the C. gigantea. If the bushes are fully grown, then one can tell the two species apart from the fact that the C. gigantea can grow substantially taller than a man, whereas the C. procera is about the same height as a tall person. I’ve never dug up one of them to examine the roots. Since they grow in arid climates, I would guess that their roots are deep and far-ranging. Very often several bushes grow near each other. I wonder whether their roots are in communication.

The colours of the flowers are variable, although most of the time they are on the spectrum of purples: from blue to red. When I first saw the white or greenish white flowers I wondered whether they are another species. But apparently the colour of flowers is not a species marker amongst milkweed. I cannot quite identify the bush whose photo you see above, because the buds haven’t opened up, but from the size I guess it is more likely to be C. gigantea. There’s been a lot of laboratory work separating the toxins from milkweed and examining their action separately and in combination.

Of all the uses of the milkweed, I guess the most widespread is its use in religion: as an offering to Shiva. The iconography of Shiva sometimes shows him with the white variety bound into his hair, giving a possible etymology to the name crown flower. The photo that you see above was taken near the temple of Omkareshwar on the banks of the Narmada. There was a whole line of such stalls on the walkway leading to the temple. I asked the lady in front of the basket what the spiny pods were, and she told me they were fruits of aak, also used in devotions. The seed pods of C. procera and C. gigantea are not spiny. So I wonder whether I have finally seen something of the elusive C. acia.

The genus of plants called Ceropegia are pollinated in a very strange way, The Family explained to me. After her first trip to Kaas plateau two years ago, she showed me photos of this strange flower and explained how they trap flies to pollinate themselves. The upright flower opens up and flies come in to look for nectar. As soon as they land, the petals close into the cage shape you see in the featured photo. The frantic fly buzzes about and pollinates the flower. After this the flower droops down and opens up to let the insect out. In the bunch of Ceropegia vincaefolia that you see in the featured photo, two of the flowers are ready, and the droopy one has been pollinated already. These tall bushes were fairly common around the Kaas lake. Apart from the mode of pollination, I found the green colour of the petals rather unusual.

But the most marvelous sight of the trip was this tiny plant on the plateau: Ceropegia jainii. I was lucky to be with two naturalists who knew roughly where to look. This species is a little rarer than tigers. In the photo you see the green egg-shaped base called the crown kettle, and the purple crown tube formed by the five petals. If you look closely, you will see the downward pointing hairs inside the tube which trap the fly. If this flower is similar to that of the C. vincaefolia, then at the narrow bottom of the crown kettle is the hard-to-reach corolla. I was not going to dissect such a rare flower to look inside it. The whole flower is a little less than two centimeters long. You can see that it grows on an unbranched stalk with thick leaves. In the photo above you can see other buds forming on the stalk.

I was so thrilled with the sight that I noticed the caterpillar only after looking at the photo. It will eventually grow into the spectacularly coloured butterfly called the plain tiger (Danaus chrysippus). I don’t know whether there is an association between this and C. jainii. Since host plants of the plain tiger include other known milkweeds (family Asclepiadoideae) it is not impossible. On the other hand, I did not see the typical circular holes that the caterpillar makes in the leaves of its host plant. In any case, this is something to watch for in future.